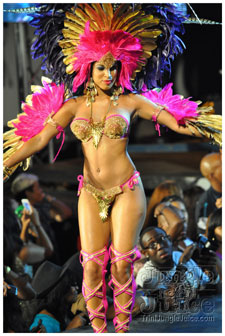 With Carnival 2013 speedily approaching, this weekend another big band in the business, Island People Mas, showcased their C2K13 presentation over a two day period. The media launch and ‘launch party’; as stated by the band’s new HNIC Collin Greaves; were hosted as separate entities.

The Media Launch was kept at Flair restaurant, with an opening speech by Greaves. His opening speech lent itself to the stapling of the evening’s event. IP couldn’t have chosen a better theme than that of their present. The whole concept of us as human losing that personal touch with each other kidda won me over. As stated by Greaves, “We’re living in an age where humanity seems to be losing touch with reality and there is that need to reconnect”. Personally, the brief but effective presentation left a lasting impression and great anticipation for the party launch. In attendance were the high spirited Honorable Minister of Arts and Multiculturalism and the Deputy Major of Port of Spain.

At the main event, the ‘Launch Party”, went off to a slow start, but in true Trini style the patrons showed up late and then complained when the event ended at the time stated on the tickets! The vibes was nice, regardless. The presentation of the costumes only added to the speech gave by Greaves at the media launch. Creative, flawless and captivating are only few adjectives I could use to describe the level of showmanship. The Queen’s Park Oval was covered in confetti and fire and special guest appreances by Kess D’ Illusionist from Synergy TV  and golden boy Keshorn Walcott who looked obviously shy.

Despite the fact I understand what IP Mas was trying to do with last year’s presentation of Heroes, to the diehard IP fans, this should be considered a comeback, and who doesn’t love a good comeback? So the countdown is on, IP did their part the rest/reaction is left to people, count me in!