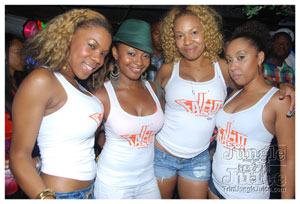 Its unofficially the last weekend of summer, we're heading on a boatride on a Tuesday night, so you know it must be Labor Day weekend.

Fallout Crew decided to unveil the raved about name sake version from Trinidad unto Brooklyn and like true to form like its predecessor, the boat was full.  This ride was only advertised in the latter half of August so you can imagine.

Since we know boats never leave on time, this one left around 10pm and it was PACE.  Freaks 4 Soca, Back to Basics, Sounds 4 Life had the boat in a gear playing everything which made the boat extra swanky.  Now, some voices are known immediately and the next selector was no different Mr. Maximum Dunout (Hollywood Sachy) himself made his presence known alongside Dj Dane.  Yes we had them live and they added an extra element of spice to the boat that had we rocking on the bay.  Though there were complaints that Sachy was talking way too much we still enjoyed the vibes.  The sound system definitely had a battle w/ the djs because it was a bit off but when in Rome we do as the Romans and we like weself.

Before we knew it we were heading back to shore, it was a little after 1am and we hot, sweaty and hungry.  To find out there was food on the boat but we were having too much fun to notice.  For a new ride in Brooklyn, Fallout definitely showed us that they can replicate the same magic they have in Trinidad.  However, next year they certainly will need a bigger boat because the one used this rounds was extra tight.

Good job Fallout crew, the TJJ family had a time and can't wait to hit your next event.