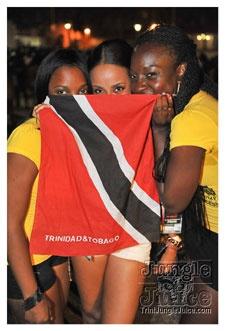 It’s Labor Day Friday in NYC and we are heading to Brass Festival in the Brooklyn Museum.  With a full cast spanning many islands throughout the Caribbean we were in store for a jam packed show.

We were running late due to traffic and trying to find park so we were only able to hear Krosfyah ending their segment as we were entering the grounds of the museum.

Entering the museum, you could feel the vibes and spirit of carnival alive.  Between the vibrant colors, sounds of pan, moko jumbies, food tents filling the air with an assortment or aromas, yes carnival was in the air.

Giselle the Wassi One was announcing that Mr. HD and Vegas had arrived and were about to hit the stage shortly.  In trying to maneuver the crowd felt like walking through a dense forest.  The museum was filled with people by time the two headliners were announced.  It was such as beautiful sight to see a sea of Caribbean flags in Brooklyn and everyone celebrating the 45th annual Labor Day celebration as well as Jamaica and Trinidad and Tobago's 50th anniversary.

We finally made it to the stage area because @ this point that was the only place to get a good view of the show.  Vegas and his hit "Bruk it Down" mash up the museum but the people wanted more.  Mr. HD and the family took the stage and the museum tun up.  Machel gave a fitting show that represented the pride and joy Trinidadians have for their culture and country with the entire family dressed in the national colors.  After what seemed like going through a good portion of his music catalog, the show came to a halt and it was all over.

We have not been to Brass in quite a while but after this year and the kind help from the WIADCA family we will be there again next year.