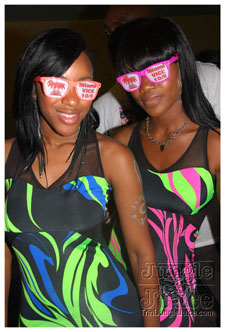 So we get a text @ 7 saying Santi-Mani-Tay on the rooftop of the Brooklyn Children’s Museum is pumping; we trying to pump all weekend so you know we heading there.  With Daddy Juice, yes he finally came back to NYC, and Text-a-holic Juice on deck we were ready to head out and catch what was left of the rooftop.

We could hear the music from the streets and were anxious to get inside.  It was a breeze getting in and when we hit the roof we were greeted by palm trees, umbrellas, and smiling faces of the 1800 tequila girls giving samples; it was an intimate yet swanky atmosphere.

All of the heavy hitters were on the cast for this event but when PanTrin Vybez hit the turntables, it was like a jumbie waking up.  Instantly it was fist pumping, jumping, like everybody now wake up with a new burst of energy and revived.  Though it was Labor Day weekend and it’s expected to hear mostly soca, this cast of djs played everything and it’s clear to say it was well received.  There was almost no social behavior on the roof, everybody was having a good time and enjoying the music, vibes and atmosphere.

The Santi-Mani-Tay family did a great job and gave the rooftop some carnival vibes with a touch of class.