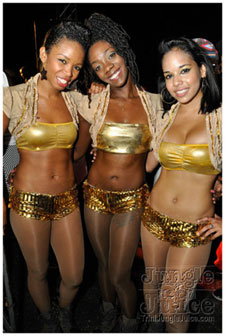 The night began in Philly while preppin' for a 9 hour drive up to Toronto for the long weekend when a surge of texts came rushing in with options for a fab time in NY; instantly our souls were filled with heat for a dance that was sure to awaken an otherwise calm night. I never partied in Brooklyn before, yet I simply could not pass up an opportunity to wine down de place in some new territory. Would we jam with the likes of Machel Montano and his huge fan base in runners and casual attire? Or, did we feel like lovin ourselves some Kes and the Band and Benjai amongst an uppity social soca crew? I guess the question for me was whether or not I wanted a taste of something new and different.

So began the curiosity for Crave, the gang behind this mission, all lead by the talents of a woman named Natalie. I had never met her, but I imagine that it would have been a pleasure to meet the one who was responsible for bringing the artists, the promoters, the food stalls with such delightful eats, the bars, the amazing decor, the photographers, the yins and yangs of all that brings a good time together. Set me free Mz. Natalie!

I admit that the hunt to find Pulse 48, then find some decent parking was a bit hectic. Felt like we were circling for bit until we heard the DJs breaking some concrete at a distance. At first glance, one can not appreciate exactly how some sweet energy could have been inserted into a small pocket of Brooklyn from the outside. I have seen the T-dot convert buildings and boats, and at times themselves into timeless beauties, but have we ever done it up in a parking lot? The weather is too irate and unpredictable up there I suppose, or maybe I'm just too upscale myself to notice one that was ever done propa. Special thanks to the organizer, I can never twist up my face at such an idea again. 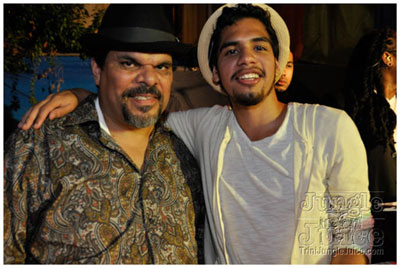 I was greeted by a couple of Crave ladies dressed in jaw dropping black sashed outfits and a sexy gentleman who seemed to be taking in more than the hookah in front of him. With a very unique plastic Crave ticket, I entered through the tented white passageway into a beautiful oasis of lighted palm trees, and intimately tucked white draped huts where honeys entertained their boos, where vibrant lighting created a perfect ambiance around them, and where high top tables of hookahs and drinks dotted the floor. I would never have known that the somebodies of NY once parked anything there. Impressive. The air was filled with the aromas of everything from Jerk Chicken to Bake & Shark. Drinks were being served with no line ups to stress the ladies in their dangerous stilettos or hinder the gents anxious to jam down the place. Certainly I had my eye on a few hotties including, Mr. Dread who allowed my unquestionable gaze to move him to wuk up dis waist later that night. Ladies, as always, represented in satiable numbers as they stood grinding dey man friend dem and in some cases, each other. Service was decent and I'm told the food was good. I was unable to try anything with only Canadian currency in my purse and my cheapo host, broke to theif.

DJs Dr. Wax, Pantrin Vybez, and Anonymous pumped out soca beats in a suitable warm up fashion. Unlike we in Toronto, where soca has everyone in true carnival spirit from begining to end, the crowd was unpleasantly mellow. Can't say that I enjoy walking into a crowd where the movement of bodies lacks the energy of soca thirsty trinis, but I was told this was expected on some level. Maybe the Machel jam held the real deal I was used to. Still, there was a decent turnout of what seemed to be Brooklyn-styled-socaholics. 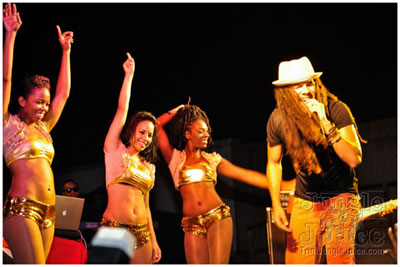 Kes and the Band were introduced by Luis Guzman, the forever famous Puerto Rican actor, who seemed to be almost as excited to be on stage as we were to hear him speak live. Hans, Jon, Kees, and Riad managed the crowd with their unique and very special talent, allowing for a good amount to get on bad while song after song vibrated their souls. No surprise there. This band do it up real nice each and every time, causing the addiction within to only grow deeper. Can I say to hell with any intervention between myself and this band? Not having it at all. How can I forget the beautiful band launching girls and their snake oil movements. Had to nudge Mr. Photographer to keep the camera up an rolling with alla dat! Pressure! Much to our disappointment, Benjai literally walked on stage and walked off without a chune to grind down to. Wow. Even tiny towns across Canada manage to ensure a great Benjai performance without any sort of stage brush off. Cheups. Moving on, we left this fete feeling sweet for a moment, but longing for more of what was missing and so it was time to entertain some ole breakfast talk, take to the streets for food, and maybe an after party or two.

A las, we still had 7 hours drive to Canada which put a kink in further plans and forced these party goers to the local convenience for purchase of some munchies, energy drinks and wasabi green peas for our long road trip. As the journalist representing TJJ for the first time, tanks fuh de lime Crave!

Cheers to you all! I'm out.