By TJJ Admin
Published on 27-Aug-12
On the eve of Trinidad and Tobago’s 50th anniversary as an independent nation, the Tobago House of Assembly has launched an intensive international campaign designed to promote the island as the premier Caribbean destination for leisure seekers in Europe and ... 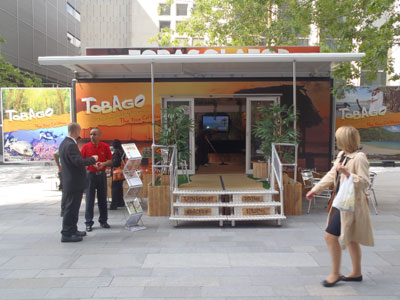 On the eve of Trinidad and Tobago’s 50th anniversary as an independent nation, the Tobago House of Assembly has launched an intensive international campaign designed to promote the island as the premier Caribbean destination for leisure seekers in Europe and North America.

Mandated to develop, sustain and promote Tobago’s tourism product, the Division of Tourism and Transportation is taking calculated steps to illustrate the tranquility and authenticity of the Tobago experience to visitors in existing and new source markets. The initiative has taken the form of a series of ‘Got-to-Go Tobago’ Road Shows, which began in the United Kingdom on August 16, 2012. Tobago’s first Road Show since 2009, the tour was coordinated to engage travel experts and consumers alike. A delegation of tourism officials, stakeholders and entertainers employed a combination of training, networking and cultural exposition to effectively promote Tobago at various events.

This mission is the Division’s direct response to declining arrival figures in recent years. The economic recession, along with the recent imposition of the Air Passenger Duty Tax by the British government, has presented a challenge to Tobago’s tourism sector. Additionally, the Assembly is now solely responsible for the operation of the weekly Monarch Airline flight from London. This fact heightens the need to engage the destination’s primary source market, which currently accounts for 69 percent of international visitor arrivals. 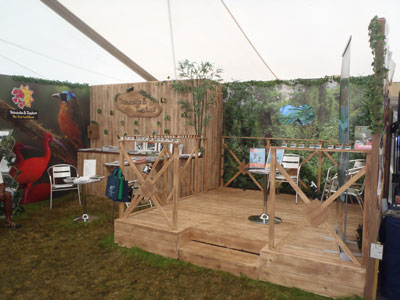 The event highlight however, was the dynamic ‘Tobagolator’. Unveiled at the Kuoni compound on August 17, the Tobago Simulator hosted training sessions and served tasty rum cocktails and food samples to a very receptive audience. A heavily branded, expandable trailer, it is the first apparatus of its kind to be used in tourism promotion.

Tobago was also represented at the annual Birdfair in Rutland from August 17-19. As an added bonus, the destination copped the awards for the best destination stand, as well as the Best of Show. By all reports, the Division and the accompanying stakeholders succeeded in this venture to heighten Tobago’s presence in the consciousness of many UK travel professionals and travelers.

“Feedback from agents was that it was great fun, different from other destination training events they’d been to, and therefore more memorable,” said Nadine Rankin, Managing Director of AMG Limited, the representatives responsible for marketing both Trinidad and Tobago in the United Kingdom.

The Division, in conjunction with AMG, is finalizing a training schedule to optimize the use of the Tobagolator at various trade and consumer events. Dwight Yorke is expected to feature prominently in this campaign in the upcoming months.

On the heels of the UK Road Show, the Business Development Unit within the Division of Finance and Enterprise Development will return the Tobago brand to London from September 2-4, 2012 for the Specialty and Fine Food Fair.

Next on the agenda for the Division of Tourism and Transportation is the Scandinavian Road Show in September, which will allow Tobago to penetrate this relatively new, but robust market. In October, a delegation will travel to the United States and Canada to reintroduce Tobago to North American travelers seeking new destinations, new experiences and the truly unadulterated Caribbean retreat Tobago offers.