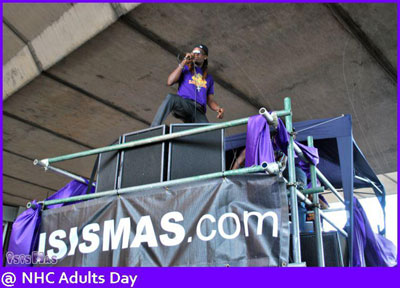 Soca artist Brother B was yet again a success in London over the Notting Hill Carnival season for 2012. Saturday 25th August 2012 Brother B performed at ‘Jab Fest’ in Southall backed by International DJ Stephen. 'Jab Fest' is the main event before Jouvert morning in London, scores of Brother B fans traveled from all areas of England to see him perform. Brother B gave away signed Grenada Flag T-shirts and signed posters for his fans after ‘Jab Fest’ to show appreciation for their support though-out the years.

Brother B wasn’t the only Grenadian artist to take part in London’s annual carnival celebrations. Ambassador Tallpree graced the stage at Poison UK’s 10th anniversary concert on Friday 24th August, which took place at the O2 arena in Shepherd’s Bush, London. Tallpree performed alongside Bunji Garlin, Fayeann Lyons, Swappi and others. The Ambassador then travelled to Canada for ‘Grenada day’ then headed over to NYC for his annual birthday bash and for Labor day to the delight of all his fans.

Brother B continued the Notting Hill carnival celebrations on Bank Holiday Monday in London. Performing for a Grenadian carnival band on the adult’s day of the carnival. As Brother B graced the float to perform, fans that were jumping with other carnival bands ran over to the float he was on, to dance and get on to his music as he sang and waved the Grenada Flag with pride.

Grenada Flags took over Notting Hill Carnival yet again. With visitors from overseas and locally in England identifying the Grenadian Flag even more now that Grenada has won its first gold medal at the London 2012 Olympics thanks to Kirani James.

Brother B heads over to NYC for Labor day this week. Then he heads back to London on the 8th September in Southall for an exclusive after carnival party. Performing alongside Carriacou’s Soca Monarch King Skinny Banton, this will be Skinny Banton’s first performance in London. The two Grenadian artists will be joined on stage by Trinidadian hit artist Isasha Brendon Young. This event is also to celebrate female Grenadian Spice’s birthday.