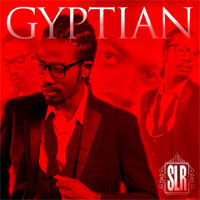 While Gyptian is prepping for his 2013 full-length studio album Sex, Love & Reggae, the 2010 Soul Train and MOBO award-winning singer returns with the aptly abbreviated SLR EP available October 16 on VP Records. This six-song, digital-only selection follows Gyptian’s critically acclaimed Billboard Top 200 album Hold You and its title-track smash produced by Ricky Blaze - which sold over 500,000 digital downloads, led to a stellar remix with Nicki Minaj and dominated rhythmic radio in 2010 (chosen as NYC's HOT 97 FM #2 Song of The Year).

SLR is a spicy yet sweet mix of love songs featuring Gyptian’s freshest hits (“My Number One,” “Overtime,” “One More Night,” “All Over” and “Wine Slow”) as well as the never-before-heard track “My Royal Love.” Gyptian’s sensuous single “Overtime," off the JustUs produced riddim carrying the same name, is currently heating up the Jamaican music charts and his stripped down smash "Wine Slow," off the Rio riddim produced by Head Concussion, has already received over 2 million YouTube views to date. Gyptian carries the torch for a new generation of reggae stars and he makes sure to pay homage to the icons who paved the way. On “My Number One,” he recreates a breathtaking rendition of this Gregory Isaacs classic.

Check out “My Number One” music video (directed by William Richards) here:
http://www.youtube.com/watch?v=wEoM5fDVqss

Gyptian recently wrapped dates in London, where he headlined the PUMA Yard closing party for the 2012 Summer Olympics and performed at the O2 arena for their series of reggae concerts celebrating Jamaica's 50th Anniversary of Independence. He plans to tour the United States in early 2013 to support his upcoming studio album.

SLR TRACK LISTING
1.Overtime
2.All Over
3.One More Night
4.Wine Slow
5.My Number One
6.Royal Love