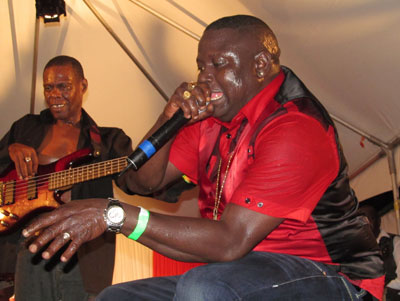 Photo: The charismatic and energetic Blaxx put the exclamation point on an evening of premium all-inclusive partying.

POS, Trinidad (Sonique Solutions) – The audience at the 2012 edition of Yorke’s Independence all-inclusive was left craving more after a performance by Dexter Stewart the musical powerhouse known to Soca fans as Blaxx. The charismatic vocalist and energetic performer put the exclamation point on an evening of premium all-inclusive partying.

The annual Independence event was this year held at a spacious residence in Valsayn and was headlined by Blaxx backed by the beloved Roy Cape All Stars. While some party goers were enjoying the fete’s culinary delicacies and wide array of top class beverages, the majority could not fight the urge to gather stage side to experience the exciting and enjoyable set from the Roy Cape frontliner and his long time band.

With a virtually never ending supply of vocal stamina, Blaxx delivered a wide range of musical genres such as Soca, Chutney, Pop, Dance and Old School R&B. He kept the crowd moving to several of his original hits including “Tanti Woi”, “Tusty”, “Good Time” and “Carnival Jumbie”. The musically diverse singer had the patrons singing along to his renditions of popular songs by Machel Montano, Beenie Man, Al Green, Usher and Maroon 5.

A true family man and advocate for the development of T&T’s youth, Blaxx was pleased to perform at this particular annual event as part proceeds are donated to K.I.N.D (Kids in Need of Direction) a Laventille based organization that aids children in need; and also towards an annual bursary to the U.W.I Alumni which assists needy students who require financial assistance to complete their education at U.W.I.

Promoter Gerard Yorke, who is receiving rave reviews for his Independence soiree, was pleased with the success of this year’s fete and the quality of performance that Blaxx and company brought to the occasion.

Blaxx took a moment while onstage to wish those in attendance and by extension all Trinbagonians around the world a happy and blessed 50th anniversary of Independence and urged everyone to continue to spread Trini love and keep the positive vibes flowing into 2013 and beyond. Although Blaxx is constantly performing, touring and making appearances at events internationally, he is still in preparation mode for what he describes as an electric Carnival 2K13 season.