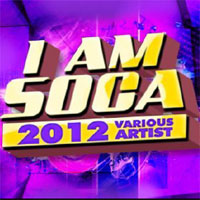 The ‘I AM SOCA 2012’ compilation was the brainchild of DJ Stephen. Since the launch of the CD, Stephen has been touring and promoting/marketing the CD extensively with some of the artistes featured on the CD such as the versatile and talented Kerwin Du Bois throughout North America, The Caribbean Region and Europe. ‘I AM SOCA 2012’ features some of the hottest artistes in the Caribbean Music Industry such as Kerwin Du Bois & Patrice Roberts; ‘I AM SOCA’ collaboration, Bunji Garlin ‘Tun Up’, ‘Denial’ Fay Ann Lyons – Alvarez, ‘Feelings’ – Benjai, Lyrikal, Iwer George, Pumpa and Skinny Fabulous to name a few.

Critical Acclaim:
The ‘I AM SOCA2012’ compilation CD has received critical praise from some of the most notable and highly recognized artistes and DJ’s within the Caribbean Entertainment Industry. Diamond Dale of the Sound Inc Family (BOSTON) was quoted as saying; “Stephen TUN IT UP!!! It Hard!!” Lyrikal who is featured on the CD has said; “Well, my take on the ‘I AM SOCA’ Compilation CD is thereof, we all see the potential of Soca Music and the level it could be established on… To have ah Major Record/Distribution Company take an interest to our Culture is huge for us and just shows us if we all do our parts as Entertainers, Producers/Artists/DJ’s etc where we can take Soca Music. ‘ I AM SOCA’!!!!!!”

About DJ Stephen:
DJ Stephen The Professor blends music with the sole intent of keeping people on their feet, dancing at all times. He has won countless awards and accreditations; from the ISA International Soca DJ of the year consecutively, to being the Best DJ on the road for the World Famous Miami Carnival; he also introduced Soca Music and his Culture at the Democratic World Leaders Summit in Brunswick Georgia (2004). DJ Stephen currently tours the world sharing his energetic, entertaining style that has dubbed him; ‘The Professor’ of Soca Music.

‘I AM SOCA 2012’ has proven to be a great success!! Fans can continue to purchase it online. It is available for download on some of the world’s biggest distribution platforms such as: iTunes, amazon.com, google.com. The following is a list of links where ‘I AM SOCA 2012’ is available:

Fans can also look forward to The ‘I AM SOCA’ part 2 in the upcoming Carnival Season 2013. Spearheaded by Poundaz Entertainment Group, ‘I AM SOCA 2012’ was distributed by Platinum Trini Entertainment and Bungalo Universal Music Group.