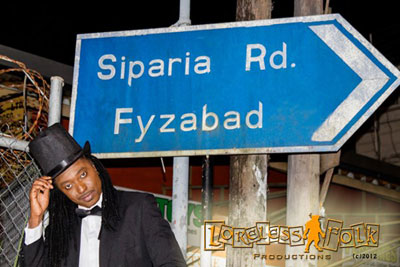 Trinidad and Tobago, WI: “A day includes many things but is nothing without love, it is that beautiful aspect of any day…whether you are sharing love with your significant other, family, friends, strangers or things... A beautiful day is needed.” the words of famed musician, singer songwriter DerwinVallie on the release of his latest single “A Beautiful Day”

Vallie expresses this sentiment vividly through his latest offering. This track is a cocktail of genres and is a perfect blend of, island pop, Caribbean soul with a splash of blues, jazz and rock that can only be described as musical brilliance. Vallie wastes no time as he also delivers an amazing video that brings to live elements of folklore from Trinidad and Tobago, with a modern twist.

“A Beautiful Day” is the second part of the Trilogy that began with his first hit single “Deep”, which also showcased the culture of his homeland as he re-introduced the local character ‘Soucouyant’, a spontaneous combustible night-time creature known for hematophagy (blood sucking).

For this video he will introduce more folkloric characters; Papa Bois, La Diablesse, Seer Woman (Obeah Woman), Dame Lorainne, Cultural dancers and a rhythm section. Capturing the true essence of storytelling a ‘seer woman’ reveals Vallie’s fortune and directs him to find a La Diablesse. Following the advice of the seer, he seeks courtship with the character known for having one cow foot, which culminates into a full celebratory wedding ceremony in the streets of Siparia, accompanied by drummers and a myriad of folk performers.

The lyrics which was penned by Vallie, was recorded at his very own DV8 production studio and The Myth Lab and showcases the talents of musicians Rodney Alexander, Bayete Williams, Eugene Bass, Darien Bailey, Dean Williams and Denice Millien and was mixed and mastered by Drethephoenix and Sterling sounds respectively.

Admitting that this project, which was scripted and directed by Vallie, was an ambitious and challenging one that required the collaborative efforts of several talented groups and individuals, after experiencing the final product one would agree that this song will leave a memorable mark.

“I feel accomplished and ecstatic that the project was a monumental success,” says Derwin. He says that his greatest feeling of accomplishment comes from the
collaborative effort between Loreless Folk Productions and south-based talents. With a talented and technologically intelligent camera crew that understood his vision and foresight, Derwin shared. “The camera crew did a great job of interpreting my vision and I must say a special thanks to Wizz Kyd and Slagiatt Productions as well as Keon Paul of F1 photo Studios Ltd. for their patience and passion.”

Loreless Folk and Derwin Vallie plan to continue producing new and innovative concepts, that showcase these rich and somewhat, dormant aspect of Trinbagonian heritage. More so, the team remains determined to keep working in collaboration with the various creative groups of our folk and craft community in the creation of ‘art’ worthy of local and international recognition.