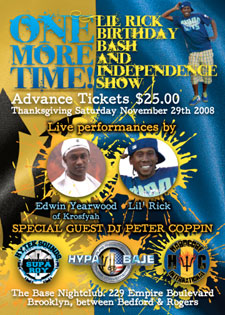 Barbadian entertainer Lil Rick will be celebrating his birthday in splendid fashion again this year. The artiste, whose birthday coincides with Barbados' own independence celebration, has decided that he will be hosting an extravaganza in New York City this November. The event was designed to satisfy two wants in the city's Barbadian community, first to see their favorite, homegrown son of the soil perform and to celebrate the efforts of the forefathers to gain Barbados' independence.

The event will be held at the highly popular The Base Nightclub in Brooklyn, New York on Thanksgiving Saturday, November 29, a mere day short of Barbados' own celebration. Several popular Barbadian entertainers will be making the trip to share in the festivities. Slated to perform along with the "Hypa Dawg" are Edwin Yearwood of Krosfyah and Peter Coppin of Monstapeice. New York deejays Supa Roy, Hypa Bajan and Hardcore will also be featured at the show. Tickets are readily available in the Brooklyn and Queens areas as they are heavily populated with Barbadian and those of Barbadian extract.