Digicel Launches In Honduras With Close To Us$450 Million Investment 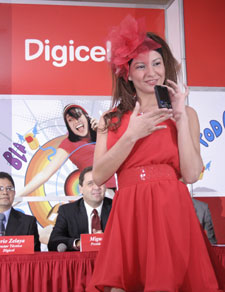 WEDNESDAY, NOVEMBER 19th, 2008 — Digicel, the largest telecommunications operator in the Caribbean and recent entrant to the Central American market, today launched services in Honduras with an investment of US$450 million to build the most modern GSM network in the country offering unprecedented high quality service.

Digicel’s network in Honduras is underpinned by world-class 24/7 customer care, a national network of more than 500 retail distributors and in excess of 40,000 recharge outlets nationwide.

With a population of nearly 7.5 million people and mobile penetration currently at approximately 60%, Digicel is confident it can stimulate growth in the mobile market in Honduras by increasing mobile penetration within five years from its current level to 80% - ensuring that more and more Hondurans have access to an affordable high quality mobile network. Digicel has also created significant new jobs, employing 450 people directly in its operations and 3,000 people indirectly.

“We are delighted to launch in Honduras and we see this market as having high growth potential,” said Digicel Central America Chairman, Denis O’Brien. “With this launch, and our imminent launch in Panama, Digicel is cementing its footprint in the Central American mobile market. Our goal is to become a significant competitor in the region by delivering superior networks and a better service to our customers.”

Digicel Honduras is led by Miguel Garcia who has 20 years experience in telecommunications. His past accomplishments include senior management positions in BellSouth operations across Central and South America.

Digicel first entered the Central American market through its acquisition of the El Salvador operation, Digicel Holdings Ltd, in 2006. Since rebranding to Digicel El Salvador in April 2007, the company quickly trebled its customer base to move from being the fourth to the second mobile operator in the market. Digicel subsequently won licenses to operate in Honduras and Panama in December 2007 and May 2008 respectively.

With operations in 31 markets world-wide and more than 6.5 million customers, Digicel’s investment in the Caribbean and Central American region exceeds US$2.8 billion.