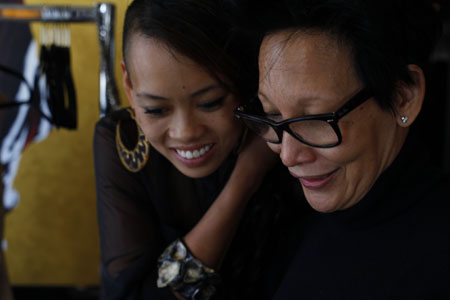 (New York, NY – October 11, 2012). This November OCEAN Style will celebrate the fifth year of hosting its FashionShowcase and will honor Trinidad born Meiling Esau with its annual OCEAN Style Foundation Award. The Foundation Award was established to honor those who have not only succeeded in establishing themselves as a force within the fashion industry, but have also gone above and beyond in promoting the overall visibility of the Caribbean’s talent and reputation in the global fashion industry.

Meiling, an alumna of the Lucie Clayton School of Design in London, is one of the Caribbean’s preeminent designers, known for her effortless, elegant aesthetic, and her contemporary reinterpretation of classic pieces. Her keen technical aptitude for tailoring sets her apart from many other designers, and she is equally versed in designing structured garments as well as the soft, ethereal and floaty dresses for which she is also famous. She has been credited with "raising the bar" in the Trinidadian fashion industry with her impeccable designs, but also with her theatrical staging of runway shows, including a memorable presentation in the mid-70s that featured live Macaws. Since starting her clothing line in Trinidad in 1982, her fashions can now be found throughout the Caribbean, including Barbados, Jamaica, St. Lucia, St. Thomas USVI and Martinique.

For her remarkable achievements, Meiling received a “Grand Master of Fashion Design” award at Caribbean Fashion Week in Jamaica in 2008, and was presented with the Chaconia Silver Medal—a National award given for the designer’s long and distinguished service to Trinidad and Tobago’s business sector—in September of the same year. Well respected throughout the region, Caribbean Fashion Week founder Kingsley Cooper had this to say “Meiling is not only the Caribbean's foremost stylist, she is also one of its foremost style arbiters. Her excellence as a designer, transcends the Caribbean and her talent has been hailed internationally long before the region was seen as a fashion source. It has been an honour to work with her these past several years and we feel a lot more confident about the region's fashion future with her in the forefront of our style revolution. “

Well regarded for her business acumen, she recently launched Trinidadian lifestyle magazine Six Carlos, and partnered with Revlon Trinidad for their Breast Cancer Awareness Campaign. As such, Meiling has been an inspiration and a mentor to several up and coming designers, including Project Runway Winner and Trinidad native Anya Ayoung-Chee.

During her illustrious career, which has spanned over thirty years,Meiling has garnered a considerable following, and has presented her collections throughout the Caribbean as well as internationally. Her collections are one of the most highly anticipated at Caribbean Fashion Week in Kingston, Jamaica. Meiling was one of only two Engish-speaking Caribbean designers to ever present at Plataforma K, Latin America’s foremost fashion tradeshow. She was recently one of six Caribbean designers to show in London this past August at Fashion Engage, as part of the Caribbean Export Development Agency's (Caribbean Export) London Engage initiative, where she showed her collection "24 Hours from Dawn to Deep Night" to critical acclaim. She has also showed pieces from her collections at the OCEAN Style FashionShowcase in previous years, and will show creations from her collection KITES at this year's event.

Meiling will be on hand to receive the award at the Audi ATL Showroom in Montego Bay, Jamaica on Saturday, November 3rd at the FashionShowcase presentation, which is the second evening of the OCEAN Style FashionShowcase/Audi Golf Invitational Weekend. The weekend kicks off on Friday, November 2nd with the ALL-White VIP Soiree on the Cay welcome party at Sandals Cay on Friday night, followed by the OCEAN Style/AUDI Celebrity Golf Invitational on Saturday morning at Cinnamon Hill in Rose Hall, Jamaica, where players will compete for a US $1 Million Dollar hole in one.

The FashionShowcase Weekend is presented with the theme fifty.five.fifty in recognition of 50 years of Independence for Jamaica and Trinidad and Tobago and in celebration of the 5th anniversary of the event. It is sponsored by Audi, Sandals Resorts, Appleton Estate Jamaica Rum, Tai Flora Luxe, Just Bet, Jamaica Observer, CVM TV, iPanema, Secrets, Montego Bay Chamber of Commerce, the Jamaica Tourist Board and Cinnamon Hill.