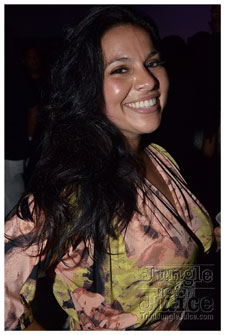 Vroom... Vrooommmm.... Vrrrroooooommmmmmm.... All roads lead to the Dezar Car Collection Museum on Friday night without a doubt. Had to be! There were so many cars sitting in traffic, trying to get to this event, that the passengers in the car got out and walked to the entrance of the venue. I hear that! One thing for sure, is that I do not blame them, especially when I saw the quality of women heading in. One would think Michael Jackson was in concert there and everyone was in their best outfits. And like any good bartender would tell you, the perfect drink is a well mixed one....Bonds like...shaken, not stirred! It was certainly apparent by the dress code, that the blend of Black & White 'The Carnival Edition' was a perfect mix for all the patrons. If you missed this one... it's on you..... because Black and White 2012 was a top event!

The crowd size was as in usual B&W fashion...packed with room to wine. The patrons were beautiful.... well dressed in trendy modern day kits. From the high heels and short skirts/pants for the ladies to the loose fit jeans and v-neck cut jerseys, there was no question about how fashionable the party goers were.

Over the years in covering this event, the promoters have had a range of venues where they kept B&W. This year seems to be the perfect fit for them and the type of crowd they were expecting. Kudos to you! Good height on the ceiling so the hot air from the number of gyrating waistlines have somewhere to go, the bars (yes..I said bars...3 to be exact) were all in walking distance, beautiful display of white drapes with masks as their print (both fixed artwork and from the lighting almost like a Bat signal), and more importantly, it was in a good location to many of the major interstates. From entrance to exit, the place was decked off with historic vehicles... including the long pink stretched convertible on the inside. Nice!

As for vibes... and as was expected, Black and White has retained a tradition of having one of the best vibes for the entire carnival. This year the promoters went a step further than their usual DJ/Artist line up that included DJ Back to Basics and Benjai... and brought all the way from Brooklyn NY, the # 1 singing MC in the business, MC Wassy. If you talk about a top class hype man without mentioning Wassy's name, you would be in trouble with me. Any party, any size crowd, and audience... MC Wassy is your man. And he did just that for B&W! Hyped up the crowd even more. The vibes was spot on again in 2012!

The food at the end was really good. We had some corn soup that was off the chain. As for the drinks... as usual, mixed drinks at B&W are great... the bartenders have good hands and pour very well. As for the beers, moving away from the bottles to using draft beer from the kegs were okay... but still not a real Heiny, or a freshly popped bottle of Corona. But at the end of the day, the drinks were all inclusive.

For me, there were minimal complaints. If anything at all, it would be the parking and management of their long line up of cars. It certainly is testimony to their popularity over the years and how they have grown. But I am sure, knowing the promoters, they will put something in place for next year. We all know that two heads are better than one. I would say however, that the management of the lines entering the building, the security, and the ticket booth were all looked at and seemed to be managed very well. We were impresses with that. A nice touch was the envelopes given to the patrons of will call tickets, that had a thank you letter and a business card! Nice!

Overall we were very happy with the service!