Point Fortin's Zion Gives All She's Got, With Soca! 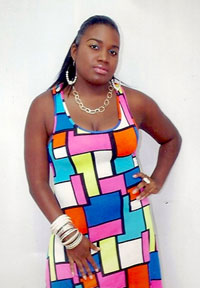 Port-of-Spain, Trinidad. October 15, 2012 -- The newest addition to Trinidad and Tobago’s Soca fraternity is 25-year-old Carla Lewis- a young woman who has adopted the sobriquet Zion, which means blessed by God- and that she certainly is.

With a brand new single called Fire Wine, which is soon to be released on all major radio stations, the Point Fortin, Trinidad native is anticipating a welcomed embrace by the people of T&T and certainly the Caribbean region. Ahead of Trinidad’s Carnival in 2013, Zion will release a few groovy Soca singles and one power Soca track, however even amid her plans to do such, she is hoping for an opportunity to collaborate musically with one ofT&T’s most ambitious young entertainers, Orlando Octave. “I really like his voice and his style of singing,” she said. Zion is true to her cause and believes that she can make a solid and positive impact on the Soca industry by fusing her unique musical style with the foundation that has already been laid by those who came before her.

Having written much of her material over the years, Zion who admits to having faced many obstacles and trials throughout her life, has held on to her talent. She says she knows that music and her ability to write, will keep her determined to excel. Noting that her preferred genre is Soca as she is Trinidadian and believes that it is her duty to represent for her culture and country, Zion says she will continue to push for her lyrics and sound to beheard. “I’ve been professionally writing Soca music for the past three years and I’ve been singing for the past year. I’ve been influenced by Calypso Rose and Singing Sandra to a great extent,” she admits.

With that big dream to perform Soca music on the world stage, much like many Trinidad and Tobago entertainers, Zion says she will simply keep at it- writing and recording while at the same time, promoting her music heavily via all possible channels, including the internet and social media portals. Her first release ahead of C2K13 in T&T is just a taste of what’s to come. She has collaborated with the producer Ato Williams who is certainly building a very good name for himself, when it comes to Soca music production. Zion will likely continue to work with Williams in a bid to maximize the possibilities for success in the industry.