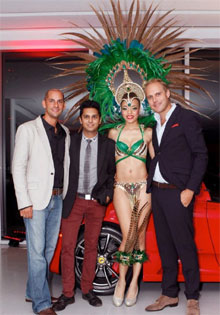 NEW YORK (October 21, 2012) - Caribbean entertainment innovator, Antilia, has teamed up with Ferrari and Maserati of Long Island in addition to Quintessentially to launch the new invitation-only social network ELEQT into the US market.

The new luxury brand was launched at the Ferrari showroom in Long Island, New York earlier this month.

The glitzy, fast growing social network debuted earlier this year in London, United Kingdom, and is already active with 150,000 members from 200 countries, including Brazil, China, Singapore, Chile, France, Germany, South Africa, Saudi Arabia and the United Arab Emirates, as well as the Dutch Caribbean nations of Aruba, Curaçao and Suriname.

The Grand Launch in New York, an invitation-only event, featured renowned Chilean DJ Karen Neumann, along with the accompaniment of vibrant Caribbean rhythms including live drums and dramatic dancers.

While its appeal is global, the owners of ELEQT, who founded their operation on the island of Curaçao where they currently reside, have a deep-rooted passion for all things Caribbean. The network offers to its members an array of exclusive upscale Caribbean lifestyle offerings including luxury accommodations at the St. Barth Properties private villa group.

"Similar to many of our event partners, the Caribbean 'jet-set" lifestyle can in itself be considered a global luxury product," commented Simon Khan, CEO, Antilia. "With the right mix of market positioning and high quality campaign execution, there is now tremendous potential to attract to the region a new generation of discerning luxury travelers in search of a premium cultural experience, while at the same time continuing to promote and celebrate Caribbean culture within the Diaspora," Khan added. 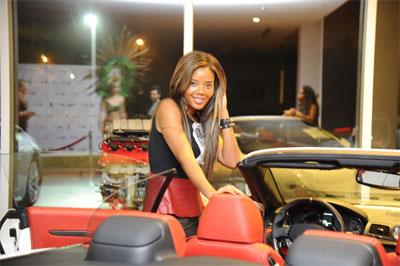 He noted that the governments of Jamaica and Trinidad and Tobago signaled a full year of cultural celebrations following each nation's 50th anniversary of Independence in August 2012.

Transportation for the cultural extravaganza was provided to and from Manhattan by a fleet of limousines from the Camelot Limousine service, while rare Italian "supercars" ushered in a select number of Antilia-invited VIPs, including television star and fashion icon Angela Simmons.

Luxurious automobiles, including the Ferrari FF, arguably the fastest four seat vehicle in the world, as well as the Ferrari California, were also made available for test drives immediately prior to the event.

Exotic 2013 Trinidadian Carnival costumes by The ela Design Company were showcased at the event, while an array of Caribbean-inspired cocktail stations were brought to life by top-shelf liquor brands including elit by Stolichnaya, Alacrán 100% blue agave tequila and Brugal Caribbean rum.

"This was a great day for our members and our partners as we launched ELEQT in New York, a pinnacle of luxury, business and trendsetting," commented Ruud Smeets, co-founder and CEO of ELEQT.

Smeets, a former General Manager of Yahoo! Search, Europe, added: "We have successfully partnered with Antilia to welcome a number of top VIP guests from the New York metropolitan area, and to bring a taste of the Caribbean to our member base of elite international travelers. We look forward to more exciting opportunities to involve the Caribbean's rich culture in our activities, while simultaneously strengthening our brand presence throughout the islands."

ELEQT is part of the Quintessentially Group, a world leader in global luxury lifestyle.

About Antilia
Antilia is a Caribbean entertainment brand dedicated to the global promotion of Caribbean culture, entertainment and tourism. The company represents a nexus between Caribbean elegance and New York style, allowing Americans, overseas-based Caribbean nationals, the media and others to experience the integration of cultures through visionary special event productions. The company continues to promote the most prestigious and upscale elements of Caribbean culture such as Caribbean art, music, fashion, spirits and liqueurs, fine dining and sought-after festivals, both within and outside the region.

Antilia is based in Trinidad and Tobago.