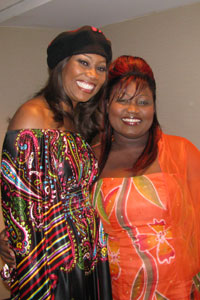 Port-Of-Spain, Trinidad – Vocal Powerhouse Kay Alleyne has been touching the masses through her unique gift of song, with shows ranging from intimate venues in her homeland of Trinidad and Tobago to lavish performances at the world's most famous arena Madison Square Garden in New York City.

On the heels of her first full length concert entitled, "Victory The Concert" which took place at Queen's Hall on September 6th, the 2007 Digicel Rising Star Champion performed at the prestigious Manhattan institution during the first ever Gospel Extravaganza where Caribbean Gospel met USA Gospel on the 19th of September 2008.

As the sole Trinbagonian in the Caribbean contingent of Gospel acts, Kay truly gave her all to represent her nation and region as a featured vocal soloist sharing the stage with musical heavyweights such as, the legendary Yolanda Adams, Shirley Caesar, Juanita Bynum, Papa San and Lieutenant Stichie.

Through her vocal prowess and delivery, she was indeed able to warm the hearts and souls of the concert patrons (often moving some to tears), while simultaneously impressing the event's personnel including stage managers, sound engineers and most notably the manager of Gospel superstar Yolanda Adams, who was amazed by Kay's exceptional voice.

However, during her trip to the Big Apple, Kay also generated a buzz as well as rave reviews outside the context of stage performances, as a featured guest on radio station WBLS, in a two hour interview with famous entertainment personality Dahved Levy.

On October 25th in Trinidad, Ms. Alleyne entertained guests at FREEDOM RAIN: The UN Concert for Human Rights and Justice and received high accolades from the UN heads in attendance, the audience as well as other featured artistes, who all acknowledge her superior vocal talent and ability.

Both Kay and her management team are now focused on placing the final touches on her soon to be released Christmas album and have been exploring the possibility of a supporting Christmas concert. However, her fans and supporters can look forward to seeing her perform at numerous events locally and internationally, including a performance for those of her fans sailing on the Treasure Queen at Pier II Chaguaramas - Old Years Night - December 31st.