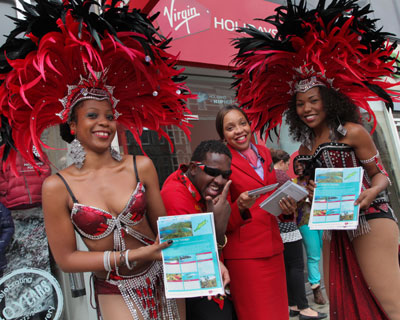 Scarborough, Tobago – Destination weddings have emerged as the preferred option for more than one out of every ten couples and Tobago’s picture perfect views, intimate venues and authentic island flavour offer an impressive range of options for those seeking a ‘Truly Romantic’ experience. As such, the Division of Tourism and Transportation of the Tobago House of Assembly is taking conscientious steps to develop the island’s romance niche in order to capitalize on this growing trend.

Already outfitted with the natural and human resources to support the wedding and honeymoon industry, the formation of the Tobago Bridal Association in August 2012 was the next step in formalizing Tobago’s position as a wedding destination. Wedding expert, Jacqueline Johnson, President and CEO of the Global Bridal Group, facilitated the process and the newly formed association is expected to strengthen ties between vendors and visiting couples, while forging strategic partnerships between organizations that have proximity to the industry.

On the heels of the formation of the Tobago Bridal Association, the Division launched an intensive international marketing campaign that included strong representation at several romance specific events in both Canada and the United Kingdom.

In September 2012, the Division attended the National Bridal Show in Mississagua, which drew a crowd of approximately 1,200 attendees. The Division also hosted a trade reception at the Novatel Hotel that featured a ‘Tobago Love’ seminar, which was well received by the travel agents and tour operators in attendance.

The ‘Tobago... Truly Romantic’ message was also articulated at the National Weddings Shows in both London and Birmingham in October 2012. Both events attracted approximately 3,500 attendees each, with an estimated 2,700 of those visiting the Tobago booth and at least three brides booking wedding packages at various hotels on the island. Additionally, sales missions were conducted with wedding specific travel agents and tour operators, including Destinology and Perfect Weddings Abroad. Virgin Holidays also partnered with the Division to host ‘Tobago Day’ at their prime location on High Street, Kensington.

Next on the agenda for the romance niche is the third annual ‘Tobago…Truly Romantic Wedding and Honeymoon Symposium’ that will take place from November 27-29, 2012 at the Magdalena Grand Beach Resort. In line with this thrust to raise the profile of the industry, this year’s symposium will feature prominent speakers, including celebrity event designer, Samantha Goldberg, who is most famous for her role as host of The Style Network hit series, Who’s Wedding is it Anyway? Workshops will also be conducted on various topics, including website development and public relations.

All stakeholders within the wedding and honeymoon industry are invited to attend. Registration information and further details will be available at the start of November.