An Historic Innovation To Hit The Road in Carnival 2013 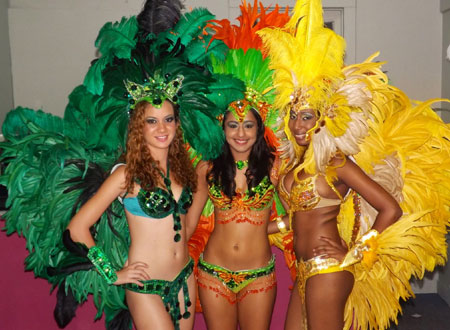 Port-of-Spain, Trinidad. Oct 24, 2012 -- Following the launch of Charm Carnival’s mas camp at 19 De’verteuil Street in Woodbrook last week, many have been curious to know some of the innovations planned by the Amar team. Robert and Sharon Amar who have both been involved in the carnival masquerade sector prior to the launch of this brand new band, have boasted of incredible new delights for Carnival 2013 masqueraders who choose Charm as their band for the road. With a yearning to keep things under wraps still, the team has decided to unleash just one of several very thoughtful concepts they will provide as part of that Charm innovation, through the streets of Port-of-Spain, Trinidad, next year.

“Nothing will be exposed. Everything will be in full costume,” said Robert Amar, referring to the band’s infrastructure.

The concept, while seemingly simple at first glance, will in fact be a first for Trinidad and Tobago- this as the Amar team aim to revolutionise the way ‘big mas’ is portrayed to spectators from across the world. “For too many years we’ve accepted and provided mediocrity in a show that is meant to be world class. In 2013, masqueraders who are a part of Charm Carnival will be proud to be a part of something historic- something that will essentially deliver a seamless view of every section of our band,” said Amar. According to the Charm team, the aim is to make the entire band seem like a sea of colour and costumed delight- inclusive of the big trucks and even the mobile toilets which, Robert Amar has the distinguished honor of reminding persons, was his innovation years ago.

Already, the online buzz surrounding the band is encouraging- this as foreign nationals have been expressing an interest in the array of costumes, which include sections like Mesmerise, Magic, Thrill and Entice. One very important word around the Charm mas camp is ‘fun’, so much so that every aspect of the operation is centered around the ideal which they are bent on bringing back in its true, natural form to masqueraders of all walks of life. “ We’re going to bring back the fun in carnival- the real fun, the jump up, the music that spans years, so that people can enjoy the road in the realest possible way. Our selectors will be experienced men who understand the impact music has on a real carnival reveler. That’s only a taste of what Charm has to offer come Carnival 2013... so people better be ready,” warned Amar.

Further information on the band’s sections are now available at www.charmcarnival.com and via the band’s Facebook page at keyword, Charm Carnival. The band is also on Twitter, dishing out the latest news on what’s to come, minute by minute, @charmcarnival.