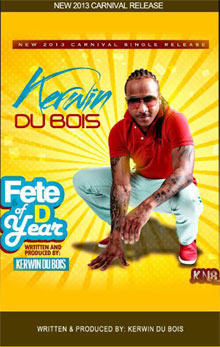 The trance you are in is controlled by is an uncanny power that we know as music; fear is distant. The power is released by the musical magician Kerwin Du Bois and you will move exactly how he wants.... Move.. Jump... Wave.

His first release for the impending Carnival Season is here. Fete Of D Year (FODY) was inspired by his love for feting and Caribbean culture. Du Bois knows that you will share the sentiments expressed in FODY, “It’s time to start it and why not do it the way we as Caribbean people know best... feting... we love it right?” said Kerwin.

You know it well, partying from sun up to sun down, searching for the events with the vibes and drinks. You are on a mission to find the perfect spot, the perfect wining partner and the opportunity to boast that you attended a Fete Of D Year. Don’t deny it, he has seen and heard you, this song is for you.

Kerwin has officially thrown his hat into the Groovy Soca ring for yet another year. With brilliant lyrics and vocals coupled with musical arrangement that intentionally sends you into bacchanal mode, he is living up to his bacchanalist confession “I ready for it!” The question is are you?

This is only the beginning for the musical magician, with a total of seven tracks to be released; Du Bois will be claiming his stake in the hearts of music lovers worldwide.