By Neil aka Joy Juice
Published on 06-Oct-12
In route to Red Eye, the # 1 most viewed event on Trinijunglejuice.com for Miami 2012, the TJJ team ran into Traffic on 95. We were not too worried since Red Eye typically attracts two crowds - an early morning to mid-morning/afternoon crowd and afternoon to evening crowd. For us, we arrived with the late crowd. This way we are ...
>> View Vaughn's Red Eye - Miami Carnival 2012 Gallery
>> View Miami Carnival 2012 Coverage 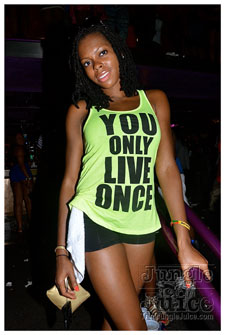 In route to Red Eye, the # 1 most viewed event on Trinijunglejuice.com for Miami 2012, the TJJ team ran into Traffic on 95. We were not too worried since Red Eye typically attracts two crowds - an early morning to mid-morning/afternoon crowd and afternoon to evening crowd. For us, we arrived with the late crowd. This way we are sure the crowd that decides to stay the distance is already hyped. Anyway, Hypa Juice (our newest rep living in China) who's first time back in Miami Carnival since 2009 asked "Can someone tell me where this traffic on the I-95 oming from?" I did not have a clue...but I speculated....."Maybe from Red Eye." We all laughed. As we got closer to the King of Diamonds, the location of Red Eye in 2012, as it was in 2011, we quickly learned where the traffic was coming from there. My goodness....If you see traffic...if you see people!!! It was obvious that RE2012 was so ram out, every parking lot in a 3 mile radius was sold out! And the owners of the parking lots made a killing! Believe me! Want to know why RE2012 was ah bess party? You should have been there!

CROWD:
Rammed out crowd without a doubt. The entire Brooklyn was in the party by the way. Beautiful woman were everywhere and men were well dressed cutting the latest brands. Thousands of people were inside and outside and everybody like they self!

VENUE/ACCESSIBILITY:
At the same spot as last year, Red Eye may have actually out grown the 'King of Diamonds.' RE2012 probably have made KOD the most popular strip club in Miami...maybe even the US. Large interior, great decor, tons of bars and bras and VIP areas....good temperature existed throughout the day. But as it got packed, the heat started to raise. As for cleanliness...well....no one had time to pick up the hundreds of bottles they put down after drinking....

VIBES:
Real Real Real vibes was in this place...Even though there were a host of DJs...for me...Pantrin Vibes literally mash up the dance!!! Seriously. And when Vegas came on stage and sang his hit song 'Bruk It Up'....KOD was left in shambles......Enough Said! Vibes Man Red Man...much respect!

FOOD/DRINK:
The drinks were flowing from a variety of angles. The bar outside was good...long, fully stocked and lots of bartenders. But there was not much I can say about the food. The line was too long! I would suggest to the promoter that when you have such a big event, you need to have lots of food on deck...especially for the large crowds who plan to stay there all day. With the cash system in place, they were good to go.

SERVICE:
As usual, the Red Eye team continues to strive to give the best service. We were satisfied with the service...yes. With the exception of two things....1) the girl at the ticket booth who did not want to look for my ID and told me she had a masters and new what I was saying...clearly did not do a good job listening since the ID was right there in front of her....and 2) Get more security for the thousands of people that attended the event to manage the loooooonnnnnnnggggggg lines and also make sure they understand the importance of the media. Other than that, Vaughn and his crew thanks for the love, Isis and the Fatal Angels crew...we love you...great job keeping things in check, and Chantel...we echo the same sentiments... We appreciate all that you do. Thanks for all that you do.

COST/VALUE:
As for cost...not bad at all. $30.00 to party at King of Diamonds...inside and outside...from 9am to 9pm? That was a steal. However, VIP was $60.00...not too bad but most of the VIP patrons had to wait till some of the party goers from the inside left, before they could have gone in. No major fault of the promoter as there was a capacity issue. However...we would suggest finding a way to treat VIP as VIP...serve them drinks in the line while they wait...like they do on Airtran! Problem solved.

Overall...Red Eye Miami 2012 was a hit...to wrap it up is simple...Sold out crowd, good bar, Vegas performed live, good service, a variety of options where to party, lots of women, on the floor AND on the stage (on the poles too) Isis and Chantel had things on lock, Pantrin Vibes mash up, Samantha and her crew rel like dey self and lastly...the look on Vaughn's face when he found out that Red Eye shut down the I-95!!! Vaughn....much respect and thanks for the love!