By TJJ Admin
Published on 31-Oct-12
POS, Trinidad (Sonique Solutions) – The effervescent Soca performer known as Blaxx (real name Dexter Stewart) has been generating quite a buzz with his latest musical releases for the upcoming Trinidad and ... 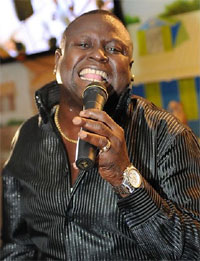 POS, Trinidad (Sonique Solutions) – The effervescent Soca performer known as Blaxx (real name Dexter Stewart) has been generating quite a buzz with his latest musical releases for the upcoming Trinidad and Tobago Carnival season.

Getting plenty rotation on several radio stations is the runaway hit “No Getaway” where Blaxx emphasizes that ‘No woman in the band nah getaway’. The tune has been receiving plenty love from Soca fans, DJs and other artistes and has positioned itself in the recent weeks as a true anthem for chipping on the streets on Carnival Monday and Tuesday.

Also on the current Soca playlist is Blaxx’s new song “No Sah” which is featured on ‘D Gaping Riddim’. In this bouncy, Groovy Soca ditty Blaxx highlights the intoxicating libations that play an important role in the ritual of Carnival. Blaxx also lends his distinct vocals to the track “Not Milk Ah Drinkin” which is a collaborative effort with artiste/producer Hitz and Raymond Ramnarine from the band Dil-E-Nadan.

Blaxx who in 2012 made huge waves with his offerings “Inna Band”, “Jusso” and the ever popular “Sound De Horn” successfully displayed his versatility with the release of original Reggae music as well as musical contributions to the annual Barbados Cropover festivities.

The self-professed family man has toured extensively this year and excited audiences in places such as Antigua, Panama, North America and the UK with his mastery of Soca, Chutney, Pop, Dance and Soul music.

The energetic entertainer who has changed up his image in recent times looks forward to a 2013 full of fun, interactive performances, new opportunities and prosperity for all. He shared, “I am excited about the new music I have out now and the material that I’m still presently creating. I want to thank all my supporters who have stuck by my side over the years; you are my motivation for doing this each and every year. 2013 is going to be more evolution for Blaxx so stay tuned”.

Fans can look out for Blaxx at many major performances throughout the T&T Carnival 2K13 season and beyond as the artiste promises nothing short of big things and positive vibes.