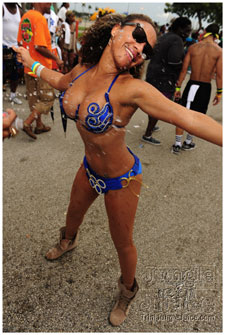 We Want “THE ROAD” Back!

In its 4th year since both Miami and Broward united into ONE Carnival, thousands gathered at Sunlife Stadium to join the festivities as both Jamaica and Trinidad & Tobago celebrated 50 years of independence.

The energy surrounding carnival week in Miami is just astonishing. Back in 2008, we boasted of covering 17 fetes for the Miami Carnival weekend. Now in 2012, word has it that there were well over fifty fetes prior to the grand finale. And I’m not sure that number even includes the “cool down” and “last lap” parties. In simple terms, from Carnival Wednesday until Sunday, you can go from fete to fete to fete to fete (night party, breakfast party, day fete, boat ride, evening fete, and back to night fete) and achieve zero sleep if your carnival heart so desires.

It’s Carnival Sunday ... time to PUMP!  With an overcast sky and the rain Gods threatening the parade with light showers; all masqeraders assembled inside the stadium with their respective bands.  With over twenty-three  mas bands this year, it shows another great sign that this carnival is continuously growing. Some of our favourite bands were Generation X, Mascots International, Carnival Nationz Miami and NY's Natural Freaks.

Despite the weather, all revelers were ready to dance, drink and socialize their worries away. But the big question on everyone’s mind was, “When are we going on the Road?” Instead, all bands queued up (somewhat) and paraded around and around the compound of the Sun Life Stadium.  Let’s take the years there was no Savannah stage to cross in Trinidad Carnival for example. If there’s no anticipated climax then there’s nothing to build-up to; and in this case, if there’s no build-up then the climax cannot be truly enjoyed. As Scorn Juice said, “It definitely wasn't fun feeling like we were only prepping to jump on the stage versus just actually jumping!!” 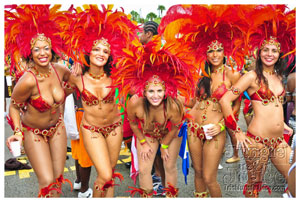 Having no actual road to parade on is not ideal for any successful carnival. And from a masquerader's point of view, why spend the money on a pretty costume to enjoy the true road/mas experience, but instead feel like participating in a moving block party with the many stormers who only paid the entrance fee for the stadium. We echo everyone’s plea to get back “THE ROAD” leading up to entering the stadium, and then building up to crossing the main stage as in the past years.

2012 MIAMI-BROWARD CARNIVAL BAND OF THE YEAR 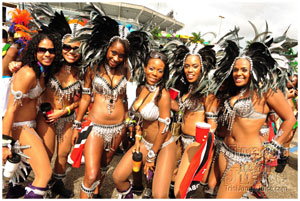 Following the parade, a massive crowd enjoyed a wide variety of Caribbean cuisine inside the park and an incredible concert headlined by Trinidad & Tobago Soca King Machel Montano and the HD family, performing for the very first time on the Miami-Broward ONE Carnival stage.

With a Junior Carnival, Kings & Queens, Panorama, and now J’Ouvert ... Miami-Broward ONE Carnival still remains in TJJ's Top 3 North American Carnivals, and continues to be one of the most sought after carnival destinations.

Special thanks to Vanessa James, Yvette Harris, Mario Zamora and the entire Miami-Broward ONE Carnival committee & staff for accommodating the TJJ family for yet another successful year. See you guys in 2013!

ps. There’s a rumor that the parade and festival might get changed to the Saturday. And we hope it’s just that... a rumor!