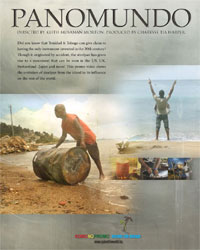 Los Angeles (November 15, 2012) - "They didn't care. A steelband man, you have sticks in your pockets; you would be the subject of police harassment." That is the opening line from Panomundo (the promo), a 7-minute video that explores the history of the steelpan. The film uses a series of interviews to give an account of the hardships that the pioneers of the steelpan faced.

"The slaves came with their African tradition of drumming and they used bamboo sticks," Morton explained. "Soon that was outlawed and other variations of 'improv percussion' were introduced until a dustbin was picked up and then an oil drum came into play."

The founding fathers of the steelpan uncovered they could make different pitches on the oil drum by tuning it in a certain way, which is how the notes on the pan evolved. By how widely it is accepted in communities around the world, no one would suspect that it came from such a tumultuous background.

"It was a great experience to talk to the men and women who witnessed or were part of the uprising," Morton said. "Not many people know what a struggle it was to play this music and that's why we want to tell this story in its entirety."

Panomundo (the word being a combination of 'steelpan' and the Spanish word 'mundo', which means "world") is set to be a feature-length film. Though the promo video gives an insight into the history of the steelpan, it does not explain how it is globally popular. The next step will be to capture the influence that the pan has on various cultures. Thus the duo has set up a campaign on Indiegogo an international crowdfunding site to raise $30,000 US to complete the film. More information on the campaign is at: www.indiegogo.com/Panomundo.

"It would not be considered 'history' if it did not have an impact on people," Harper explained. "In order to fully understand how strong that influence is, we will have to visit those locations and have them explain it to us."

The deadline to raise the funds to complete the film is 15th January 2013. Morton and Harper will then shoot in Spring 2013 and edit the project by summer. They have been asked to preview Panomundo ahead of the Notting Hill Carnival in London in August 2013.

"It will be an honour, really. We've had such nice chats with Sterling Betancourt, Russ Henderson, Ray Holman and Ray Funk, to name a few. It will be a pleasure to have their knowledge and story heard by an audience," Morton said.

In the meantime, the filmmakers will continue to screen Panomundo (the promo) - they had two recent screenings in London, including one at the 4th International Steelpan Conference at the University of East London- and another in Los Angeles in October. The promo video can also be seen online at YouTube: http://www.youtube.com/watch?v=gkFx9TzrN9U

Towards the ending of Panomundo (the promo), international pannist Ray Holman sums it up nicely: "Pan has taken over the world....Canada, Africa, Germany and France. I'm very proud...that such a small country as [Trinidad & Tobago] could have music that will be interesting and so loved by people in large metropolitan cities."


ABOUT KEITH MUSAMAN MORTON
The director/CEO Komonopromo. He is Black-British (his family is from St. Kitts) and he lives in London. Keith co-directed and co-produced A Brief History (2011), which gives a short introduction to Notting Hill Carnival in London. In addition, he directed Day One, which won the "Audience Choice Award" at the New York International Film Festival (April 2011).

He met Charysse Tia Harper at the New York International Film Festival and decided to work together. Their first project was T&T 50 in Fifteen, which Keith directed and edited and Charysse was the producer and DP. The project explores important events that have occurred during the 50 years of Trinidad & Tobago's independence and it is told in 15 minutes. http://www.youtube.com/watch?v=BIJ_cVFI0Yo

Keith has been an advocate of supporting independent films that he hosts screenings throughout the year in London, but his big event is "Bringing Sunshine to October", a month-long film series in October to commemorate Black History Month in the United Kingdom. http://www.itzcaribbean.com/bhm_lambeth.php

ABOUT CHARYSSE TIA HARPER
The producer/CEO Xplore the World. She is Trinidadian-American who resides in Los Angeles. She directed/produced The Other Side of Carnival (2010) that showcases the social and economic impact that Trinidad & Tobago's Carnival has on its society. It has been shown at Caribbean Film Corner in Antigua, London and Berlin, as well as other festivals in the US and UK, where it won "Best International Documentary Short" (ITN Distribution & Media Festival 2011) and "Best Cultural Documentary" (New York International Film Festival 2011).

Her passion is educating through entertainment and helping others. She recently worked on a public service announcement (PSA) for Kids in the Spotlight (Sept. 2012) and directed/produced All Peoples: The Movie (Oct. 2012), an informational video about a charity in South Los Angeles.

For more information on
Panomundo and other Xplore the World projects visit: http://xploretheworld.biz/.