'What Goes Around' Finally Comes Around To New York City 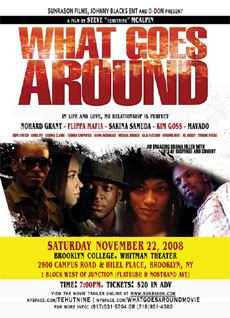 New York, NY (Ms. RAINE INC.): What Goes Around, the critically acclaimed film tackling un-protected sex and the spread of HIV/AIDS among young Caribbean- and African-Americans, is finally coming around to the Big Apple. On November 22nd, Sunrason Films, Johnny Blacks Entertainment, and O-Don are presenting What Goes Around at Brooklyn College's Walt Whitman Theatre in Brooklyn, NY.

The film also features that last screen appearance of Washington DC entertainer Alton "Rraw Dawg" Ashman, who was gunned down in his hometown before taping wrapped on the film. In tribute to Ashman, What Goes Around breaks the current trend of films targeting younger audiences by excluding any violent action sequences.

"This is a movie with a message. I purposely stayed away from making yet another violent Jamaican film," states director Steve "Tehut Nine" McAlpin, who's gritty street tale Bashment: The Fork in the Road became an underground hit in 2007. "This film is not only against violence, but it focuses on saving lives. The goal of this film is educate young Caribbean- and African-Americans about the dangers of un-protected sex."

According to the Center for Disease Control, African-Americans account for 45% of new HIV infection rates in the United States, which is seven times higher than the rate of infection for Caucasian Americans. The Caribbean People International Collective Inc., organizers of the annual AIDS Walk Caribbean in Brooklyn, NY, report that in New York, 80% of new AIDS diagnoses and deaths are among African Americans and Hispanics. According to the CPIC, Caribbean-American community in Central Brooklyn experienced a 200% increase in HIV infection rates between 1997 and 1999, and continues to have one of the highest infection rates in Brooklyn.

The CPIC also notes that among the "barriers of care" for Caribbean-Americans are the lack of knowledge about HIV/AIDS, language barriers, social stigmas, concerns about confidentiality, and cultural practices and stereotypes.

Jamaicans.com, an online community for any and everything Jamaican, lists the film as one that 'people must put on their must see list' and hails McAlpin for doing a "superb job tackling the HIV/AIDS epidemic and the stereotypes that are pervasive in the Caribbean community."

"The film has an important message about the dangers of sleeping around, the importance of safe sex, and HIV awareness," states What Goes Around leading actor Flippa Mafia. "Sometimes we don't want to heed certain things, but this film speaks to people of color, especially Jamaicans and Caribbean people on a level that they will understand and appreciate. It will open their eyes."

"It's important that people, especially young people make the right choices," states Mavado. "In these times they need all the information that they can get to make the right decision and protect themselves."

What Goes Around will be screened Saturday, November 22nd at 7pm at the Walt Whitman Theatre at Brooklyn College (2900 Campus Road) in Brooklyn, NY. Tickets are $20 in advance. To purchase tickets contact Brooklyn College Box Office at 718-951-4500. For satellite ticket locations or more information contact Charlene Campbell of Sunrason Films at 954-439-3820 or sunrason@gmail.com.