Challenges Ahead for Jahmoun Mendoza - But The Experience Awaits 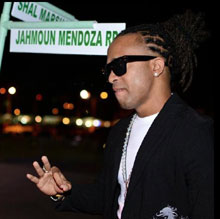 Port-of-Spain, Trinidad. November 19, 2012 -- Jahmoun Mendoza is making tremendous leaps ahead of carnival 2013 in Trinidad and Tobago. His single, Nah Stay Home which was produced by Madmen Productions is making waves already and as if that’s not enough, the radio personality who stunned many when he made it to the finals of the Groovy Soca Monarch competition in 2011, assures there’s much more to come.

Mendoza’s spirited personality shines through in his music. On air at one of the country’s most listened to urban frequencies, the artiste delivers what is possibly the most energetic three hours across the FM band between the hours of 12pm and 3pm Monday to Thursday. Music is a very big part of Mendoza’s existence and so, when he jumped onto the music scene a couple years ago, it was hardly a shock.

Ahead of C2K13, Mendoza is preparing for yet another first- the challenge of standing beside veteran T&T entertainer, Ronnie McIntosh at the forefront of McIntosh’s new band, The Experience. “This is like the first time I will be performing at one event and going to another, night after night. Experience was launched in the later part of Carnival 2012 and we did like seven all- inclusives and it was a real experience for me, so this time around, actually kicking off the season is going to be something completely different,” he acknowledged.

Mendoza says he sees it as a challenge but anticipates it all the same. “I’m going to be on stage with a veteran and I’m going to soak off everything from him and I know that he is not going to allow me to fall or fail. Ronnie is going to make sure that I’m good- that’s one thing I’m sure of,” he said, noting that their relationship is very similar to that of a father and son. “Ronnie relates to me in a way that I don’t think he relates to anybody else. We feed off each other well on stage so while it will be a challenge, I know it will be ok,” he assured.

Jahmoun has been very careful of the music he puts out so much so that in the past two seasons, he’s only released two singles for both carnivals. This year however, there is speculation that he will be dishing out something on the groovy side of things to add to his repertoire. “I’ve been contacted by a few writers so I’m thinking of doing another song but I’m not certain just yet. We’ll just have to play it by ear,” he said.

In the meantime, the very vibrant radio mic man/ artiste is enjoying every bit of the ride in the entertainment arena. He has earned the respect of his peers and the masses alike and judging by the response to his 2013 single, that respect is about to increase- deservedly so.