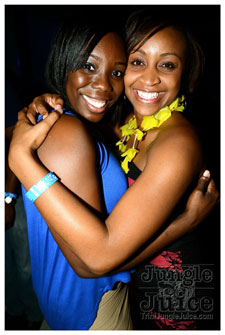 An event that is picking up steam like the locomotive train in 'Ye Ole Gun town'.... Houston TX was the home of the 2nd annual "Forbidden!" As we enter the venue, it was obvious that the promoter, Janelle and her Divine 1 crew, spent the time, effort, energy and money, to get the place where it needed to be. Good layout of the venue... a descent bar, lots of dance space, a VIP area and the crowd with their minds all on partying... no one could ask for anything better.

Good size crowd with sexy women everywhere, Forbidden was missing just one thing in the house... We were not sure what was forbidden but as soon as we find out, we will let you know. Other than that, the music was in check as Back to Basics out of New York was in full swing. And even though we begged for a bit more soca from the upcoming carnival season, nobody really stopped throwing waist!

The vybz couldn't finish in this party. The Lymerz Crew and their entourage was present and accounted, having a hell of a time. It was also good to see the Houston Caribfest president and his staff come by and show their love and support. Fire Kyle, as always was in the house and even the U of H track team, was ready to cross any hurdle that came in their way to prevent a wine. Much respect to T-Rock, the singer of this year's 2013 Trinijunglejuice.com's emerging Fete tune with his hit song 'Hit & Run.' T-Rock... dat tune bad.

To Janelle and Alicia, great job. Keep up the good work. TJJ looking forward to you having us there again in 2013!

As Always,
Joy Juice Out and About!