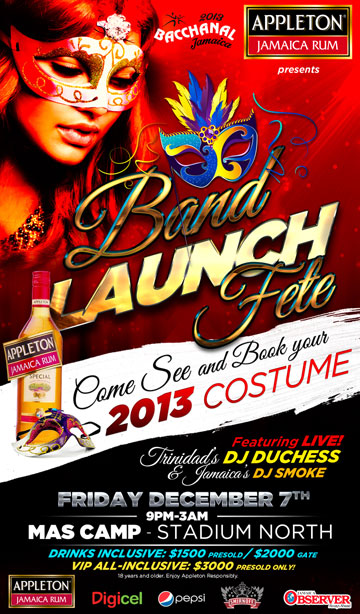 (Kingston, Jamaica – November 21, 2012) – Friday December 7 is the date for socaphiles to re-awaken their inner reveler with the launch of the 2013 carnival season. The Bacchanal Jamaica pre-season fete will be held from 9:00 p.m. – 3:00 a.m. at the Mas Camp, Stadium North where the season’s intensely subtle and seductive theme, “Le Masquerade”, will be unveiled.

“Le Masquerade” will infiltrate all elements of the upcoming season, with this opening party featuring the best soca party essentials: great music, infectious vibes and the inhibition of dedicated soca junkies preparing for another exciting year of bacchanal and more bacchanal. Along with the colours, lights and actions guaranteed to make this event a mega-success, the party will also include a first look at the season’s road parade costumes, showcased in a specially-designed fashion show. The latest offerings in the realm of soca music will be introduced by deejays well known to the Bacchanal Jamaica crowd – local- based mixer, DJ Smoke and, coming straight from the island of soca, top Trinidadian and Caribbean female disc jock Duchess, will also be on the turntables.

Soca fans can be a part of this launch fete all drinks included for the cost of $1,500 pre-sold and $2,000 at the gate for general admission. VIP tickets are also available for $3,000 pre-sold only and offers access to a premium bar and finger foods. Public Relations Representative for Bacchanal Jamaica 2013, Ms. Renee Hartley says, “Our patrons, both new and old, can expect each event to unmask something even more entertaining and electrifying than the last. 2013 is going to be our best season yet!”

The 2013 Bacchanal Jamaica season will host its regular Friday night fetes starting February 15. The season would not be complete without the usual events which fans have come to know and love – Socacise starting February 18, Beach J’Ouvert to be held March 30, Soca at the Sandbar on April 3, and Bacchanal J’Ouvert on April 5. “Le Masquerade” will culminate with a fashion and star-studded Road Parade on Sunday April 7 in Kingston.

Fans can stay tuned for the latest on the ”Le Masquerade” season by liking the official page on Facebook – www.facebook.com/BacchanalJamaica, following updates on Twitter - @BacchanalJA and viewing the website at www.bacchanaljamaica.com.