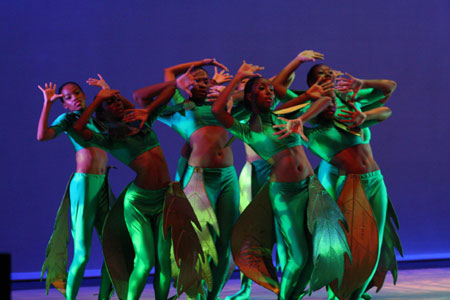 November 23, 2012 – Port of Spain, Trinidad and Tobago... On Saturday December 1, 2012, La Danse Caraibe (LDC), Heather Henderson-Gordon’s children’s dance school, will open the curtain to Spooked, a ballet with a unique folk twist. Trinidad and Tobago’s traditional folk characters will take centre stage in this play in movement that continues on Sunday December 2, 2012 at Queen’s Hall.

This mystical journey in dance, tells the tale of a young girl, Precilla, who gets lost in a haunting forest. Precilla journeys through the forest, which is home to a host of unspoken characters. Along the way these characters reveal themselves to her taking the shape of mischievous Blue Devils, playful Baby Dolls, the infamous La Diablesse and scandalous Jamettes. Ultimately, Precilla must find her way through this unfamiliar territory to return home to her brother, Smithy, and her grandmother. In signature LDC style, this ballet will weave its story in a variety of dance genres including classical ballet, modern, tap, Hip Hop and folk.

LDC opened its doors in 1986 to offer training to children from age 3 in the ballet and modern dance styles of the Imperial Society of Teachers of Dancing (ISTD). With a vision to develop well-rounded dancers, the school, which encourages its students to train in a minimum of three (3) disciplines, was the first in Port of Spain to compliment its classical and indigenous dance instruction with urban Hip Hop techniques. LDC boasts a long list of past productions including the musical, Dancer, which featured an original sound track composed by Roger Israel, musical direction by Allison St. Clair and a script that was adapted from the book written by Marguerite Gordon.

Prepare to be taken on a whimsical journey through Trinidad and Tobago’s folk history at LDC’s Spooked. Tickets are available at Crosby’s Music Centre, the Queen’s Hall box office and at the school from 5:00 p.m. to 6:00 p.m. at 32 Luis Street, Woodbrook. Formore information send email to liza@estuarypr.com or call (868) 620-9677.