By Tuere aka Teekay
Published on 30-Aug-12
As we were entering the venue Fay Ann and Bunji were on stage and we could hear Fay Ann delivering a soulful rendition of an Adele song. By the time we reached inside their performance was unfortunately over and DJ music took over. This would’ve been the perfect opportunity to get ...
>> View House Of Marley Concert Gallery 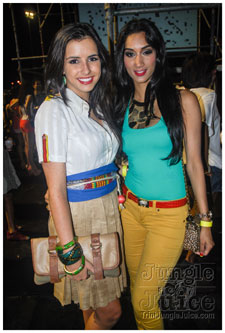 As we were entering the venue Fay Ann and Bunji were on stage and we could hear Fay Ann delivering a soulful rendition of an Adele song. By the time we reached inside their performance was unfortunately over and DJ music took over. This would’ve been the perfect opportunity to get refreshments if all that was promised was available alas this was not the case. We started in the $800 VVIP section and were told immediately by a patron to go elsewhere because that bar had run out of drinks. We couldn’t believe our ears so we decided to approach the bar anyway and found that they had not completely run out of drinks but they had run out of ice and chaser and had resorted to serving patrons hot beer and Three Zero rum. One irate attendee was cussing like a sailor and letting out his frustration on the bar staff who seemed to be immune to it as surely it was not the first cuss out of the night. Another complained that he spent $800 and still had to buy a bottle to make up for the inadequate bar.

We decided to investigate the situation in the $600 VIP party section and things were also grim there. The beers were cold but there was not enough staff to pour them and patrons resorted to ordering multiple beers at a time, pouring them for themselves. Disappointment was evident here too. We then headed to the $1000 VVIP lounge. While there was no evidence of the ‘premium’ alcohol that was advertised, stocks had not yet been depleted in this zone and for the time patrons appeared satisfied with the food and drink available. This was not the case a couple hours later when they were lamenting the hefty price tag attached to the sub par bar which did indeed run out of ice, chaser and alcohol way too early.

We like others were in disbelief that a promoter would attempt to stage such an elaborate layout with highly advertised perks and then not follow through. Given the prices for the various sections we agree that patrons had every right to be thoroughly disappointed and disgusted by the execution of what was promised.

Thank goodness for the Marley brothers! The sons of reggae legend Bob Marley were the saving grace of the night. Though they took the stage late, they delivered a performance that was well worth the wait. Kymani kicked things off with a performance with his own band. His set, which included some original tunes delivered in his smooth, raspy voice, was the perfect appetizer for the main course.

After a short break for the bands to switch, the main man himself Damian ‘Jr. Gong’ burst on to the stage and sent the crowd wild! Undoubtedly the most commercially successful and thus popular of the brothers, Damian commanded the stage with ease and treated his fans to a selection of their favourite Jr. Gong hits. His high-energy performance would not be complete without his effervescent back up singers -who we love to see especially during the performance of ‘Exodus’- and his never lagging flag man.

Damian was joined on stage by brothers Julian and Stephen who took turns serenading the crowd with their hits from over the years. Stephen whose voice is arguably the closest to their father’s performed a solo set that kept the crowd moving even though it was now the wee hours of the morning. He and Damian teamed up for their duets together including the hit "Pimper’s Paradise". While it felt like a satisfying performance it still wasn’t over at that point as after exiting the stage Damian returned for an electrifying encore performing the lover’s anthem of the year "Affairs of the Heart" and one of his biggest hits "Welcome to Jamrock". All the brothers then united on stage to perform a pore-raising finale.

Our synopsis is that the Marley brothers never disappoint and it’s always a joy for music fans to see true talent on stage. We do hope however that the promoters take note of the hiccups that nearly marred the evening and for their future ventures do not short change patrons in attempts to fill their pockets.