By Salih aka Uptown Juice
Published on 18-Nov-12
Where do I start? When I first heard an Atlanta event, I thought, warmer than New York...Yes! And maybe I could sneak in a quick 9 or 18 holes on my ...
>> View Masque n Mas - The Masquerade Ball Gallery 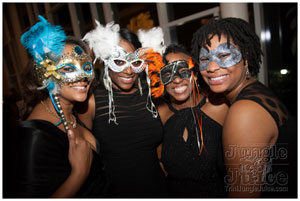 Where do I start? When I first heard an Atlanta event, I thought, warmer than New York...Yes! And maybe I could sneak in a quick 9 or 18 holes on my down time.
I went to the airport with a jacket on while trying to warm up thinking of the Atlanta heat... needless to say I get off the plane and realize it’s just as cold, if not colder than home... damn!!! However, as the day progressed it warmed up nicely. Nice enough to where I didn’t need my jacket or thermals. After  a much needed nap I prepared myself to shoot... photographers  can only capture the physical/facial/body expressions, however the spiritual is unseen. And the spirit I'm referring to filled the room that night.
This Masque n Mas ball was a charity event with a portion of proceeds going to Multiple Sclerosis Center Of Atlanta (MSCA) on behalf of the honorary guest speaker Stacey Samuel-O'Brien aka STAX! Stacey is a precious gem disguised as a human being. I say this because in light of living with MMS, she smiles a million times more than a person with the common cold.
The event flowed well from start to finish. From the hostess to the live band, and not forgetting the voice-tress Raen singing “I Will Always Love You” very close to the late great Whitney Houston putting members of the crowd in tears. There were guest appearances by Dr. Anil Ramnan, Consul General of Trinidad & Tobago for Miami and Stone Mountain council member Cyril Mungal, and also a monologue from Roderick A. Warner.
The band played rhythms that allowed for conversion and little dancing if you wanted to. During breaks, a DJ kept the vibes at a plus leading to the auctioning of a painting by Safiya De Siva that Justin Ward became the proud owner of.
All of this was taken in on a satisfied belly thanks to the four caterers that were on hand. The selection of finger treats was vast and bartenders were very generous when pouring drinks. Atlanta hospitality was top notch. Krista Ifill was also among the speakers giving a humorous informative description of life as a very close friend of the honorary guest.
This experience reinforced the phrase "Life is what you make it". I must say, Samuel-O'Brien aka STAX has made ‘Jungle Juice’ out of her life's trials.
Did we forget anything? Add your 2 cents below...
-Salih aka Uptown Juice