By Kris-Michael aka Jokey Juice
Published on 01-Dec-12
With Trinidad Carnival 2013 creeping closer and closer to our midst, Soca parties and music were becoming more and more abundant. Time to head to central Trindad for one such event called iCandy J'Ouvert. The weather that night wasn't too appealing for starters; ever so often the earth would get ...
>> View iCandy J'Ouvert 2013 Band Launch & Cooler Fete Gallery 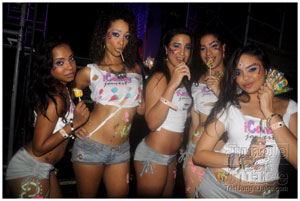 With Trinidad Carnival 2013 creeping closer and closer to our midst, Soca parties and music were becoming more and more abundant. Time to head to central Trindad for one such event called iCandy J'Ouvert. The weather that night wasn't too appealing for starters; ever so often the earth would get showered by the heaven's tears which had us photographers and even patrons ducking for cover. But hey, the vibes cah done, and it didn't. To the review...

Well because of the unforeseen weather I arrived a little on the late side, but on entrance, the energy was felt. Patrons seemed to have already had enough to drink and enough music to dance to to have them on cloud 9. Even the backstage area had some ICandy girls that were really some "eye candy" for both partygoers and photographers.

As the evening got darker and wetter because of the rain, it was time for some live performances. First to entertain the crowd was the leading lady in the HD family; Miss Patrice Roberts. Her performance was filled with energy and sass as she sung all her classics including her 2013 contribution "Ah Little Wine" which had the crowd singing along word for word. She also did something for the ladies pleasure by asking some brave souls to join her on stage in a wining competition. To me, I could care less, but I'm sure it was a treat for the opposite sex.

Who say boss? As in "D Boss". Next performer was D Boss himself; Neil 'Iwer' George. We all know he is capable of putting on a great show, but with his somewhat controversial soca song "Bubble", his presence and performance was felt a lot more than past... and it can only get better from here because of Carnival.

The young and talented reigning Chutney Soca Monarch; KI then graced the stage afterwards. His performance was very hype and fully embraced by the crowd in attendance. He was even joined onstage by the lovely iCandy girls ... lucky guy.

Time to adjust your monitors to "4D" settings. It's time for Swappi. Energy, energy and more energy. From his flexible female dancers, to his hyper male dancers, and to Swappi unleashing his ammo of hit after hit after hit... what more would you want? He even gave people a reenactment of Super Blue's memorable performance when he climbed up the speaker box and entertained the crowd from the elevated height. Honestly, I was a bit concerned because of the rainfall, things get slippery. Fortunately a scenario like that did not play off. He was then joined by fellow artiste Ravi B who then proceeded the control of the performance.

The iCandy experience went well and patrons were greatly satisfied.... some even asking for an encore. Hmmm, I wonder what the promoters will think of next?

Must say thank you to all committee and staff who made the iCandy Jouvert 2013 Band Launch and Cooler Fete the success it was. DJ Greg, hats off and thumbs up to you. We hope to see you on the road for Carnival or at any other projects you may have in store for us.