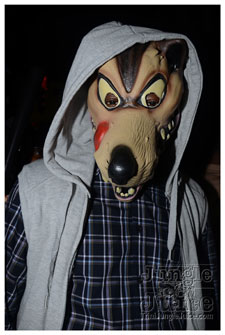 On this night, even Little Red Riding Hood, skipped her way to the Paranormal Activity at Alero Restaurant in Downtown DC. To her surprise, she found the Big bad wolf, getting on really bad with Goldie Locks... and needless to say... was not please. Trust me... There was paranormal activity going on in the Big Bad wolf's head right after that. Red... wasted no time in handling her situation. In her words... the timing was right, the music was sweet and the vibe was off the chain. She needed her wolf to be with her. So said, so done.

On a night where every possible costume you can think of, showed up, it could only be bettered by the music that was played. Bk Ent. and Carib United teamed up for this 4th installment and brought in one of the best young crowd pleaser in Barry P. of Jugglers Intl! The moment he began to play, there was no looking back....Actually...you couldn't look back because 'Freddie Cruger' was right there waiting for you!!! You needed to keep your eyes on the bumper in front of you! Barry was followed by DC veterans DJ Sprang Int'l and DJ Hazzard, who as you would have guessed... kept the vibe of the party where it needed to be.... and that is, making the people feel that they were all in the best party ever..... Great job DJs!

The fortune at this event was that the promoters got everything right... from the DJ's, to the location to, the price at the door to the service..... they did not miss. The costumes were exciting to see, considering it was a week after Halloween... but guess what...that just meant they had more money to spend by the bar since most costumes were on sale anyway... :-) Now I don't know what it is about a woman in a uniform that excites me... but for some reason, they had my attention. I felt truly safe in that event... considering all the SWAT and FBI and officers of the law that were there!!!

Overall, a successful venture. Great location, but probably a bit too small for the large crowd. The crowd was sexy, mature and really vibing all night. The DJs as mentioned were all on point and the energy in the place was euphoric! Good service overall so no need to complain about anything.

Jason and Robert, good work again.... you guys are a great team. Keep it up. TJJ had a blast. Thanks for the love.

For the record, I bought my costume for Paranormal Activity 5 already.... What about you?