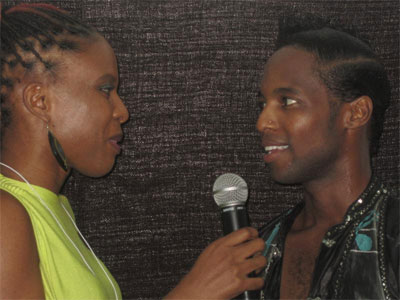 Photo Caption: Sharlene Lindsay host of Backstage at Festival 50 chats with AJ Cassell on air after his performance at the Calypso Eliminations.

LITTLE BAY, Montserrat (December 9, 2012) - The crowd chaired and danced as 32 calypsonians, some old and some new took to the brand new stage at Festival City for the Calypso Eliminations on Saturday, December 8.

Montserrat is gearing up for the launch of its 50th year of festival which opens on Saturday, December 15.

The eliminations was hosted by Radio Personality Basil Chambers and Lorraine Lewis. The evening moved swiftly to allow for attendees to enjoy the thought provoking and sometimes hilarious songs created for this year's competition.

Returning to the island's calypso stage for the first time in 10 years was Roland Johnson, who performs as King Kenzie, delivered a stunning rendition of Silver Lining. Making his debut to the stage and definitely walking in his father's (Alphonsus "Arrow" Cassell) footsteps was AJ Cassell who delivered a power-packed song called Pedigree, which was an oath to his dad to carry on the musical legacy.

After the numbers were tabulated, using Talypso, a new scoring system created by Calypso Sub-Committee Chairman Dennison Daley and his business partner Manish Valechha, 16 artists are one step closer to the prize of EC$ 15,000 and the crown.

"The eliminations delivered a solid line up of performers and music and made a statement that there is better ahead," Daley states. "So we are looking forward to the next round."

The Calypso Semi-Finals take place on Friday, December 14, 2012 at Festival City, Little Bay and can be viewed live on pay-per-view via the Montserrat Festival Internet site. Sharlene Lindsay is hosting the back stage live stream which gets feedback from the artists and the audience at the shows.

Montserrat is presently celebrating fifty years of its cultural festival which officially opens on Saturday, December 15, 2012 until January 1, 2013. More information on the festival and the calypsonians competing can be found on www.montserratfestival.com.