Nadia Batson To Take The World To Shangri-La 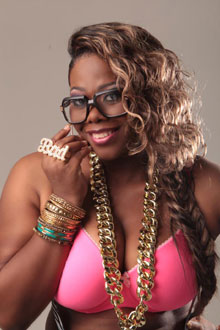 Port-of-Spain, Trinidad. November 28, 2012 -- Get ready world, Nadia Batson is firing up and she's about to make a fictional paradise become reality in the sweetness of Carnival 2013.

Batson who’s been hitting the gym hard in recent months is likely to deliver one of the most memorable stage shows when she takes on the carnival arena in the season ahead- but what will make her moment in the spotlight an unforgettable one is the music she will deliver- among them, a brand new, rhythmic song that’s set for release this Thursday. It’s called Shangri-La.

Shangri-La was a fictional place described in the 1933 novel, Lost Horizon by British author, James Hilton. The fictitious location has become synonymous with any earthly paradise, but particularly a mythical Himalayan utopia- a permanently happy land, isolated from the outside world. Batson’s vocals in this track which is produced by and co-written with Martian Music’s Don Iko, is likely to remind the world that this woman continues to be a force in the Caribbean music fraternity.

Nadia has been riding the wave of her initial success as the leader of the brand new band, SASS in 2012. Ahead of Carnival 2013, she is proving her consistency with several hit singles that have been enjoying constant rotation across radio stations in Trinidad and Tobago. This upcoming release is likely to seal the deal in the minds of promoters and fans alike as the buzz surrounding the track is already high- this even as Don Iko continues the final editing process to ensure of its perfect sound.

Batson warns that this one will likely send crowds into an uproar as it is fueled from beginning to end by powerful spiritual-like outbursts, almost reminiscent of Superblue’s intrinsic signature vocal embellishment. The song is carded for release this Thursday so with all eyes looking on and ears peeled to hear what’s the next big hit, the warning has been sounded- Nadia Batson isn’t playing and Shangri-La will be that big hit!