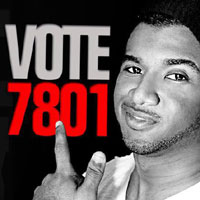 Iziah has entered the Digicel competition both in 2009 and 2010 but only making it in to the semi-final rounds. This year however Iziah was able leave with a cash prize of $150,000 as he entered the finals for the first time. When asked what he would do with his cash prize, Iziah responded “10% goes towards tithes. In addition I would also be getting something very special for my supportive relatives, and of course saving and investing part of my winnings. ”

Iziah was known for his R&B renditions over the past two years, having hosted yearly concerts at Fiesta Plaza in Movie Towne along with his own musical band. For the entire Digicel Stars competition Iziah sang gospel music and has decided that this is the genre of music that he would be singing with his band for years to come. When asked what influenced his decision he revealed that he was losing too much doing R&B. He emphasised that his relationship with God was suffering.

Iziah would like to extend thanks to everyone who texted in his ‘7801’ code for the competition. He assures his supporters that this is only the beginning and is looking forward to working on his first gospel album. For more information on Iziah and his band please feel free to email him at iziahpr@gmail.com. For media inquiries please email rockstartt@gmail.com