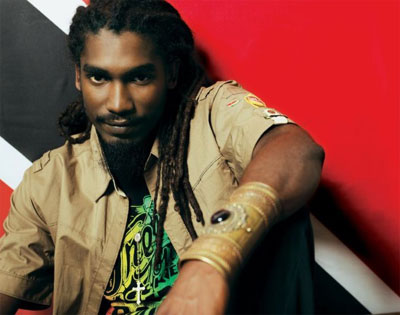 Port-of-Spain, Trinidad. December 19, 2012 -- Even T&T reggae crooner Jamelody knows when it’s time to give thanks for the blessings of life, kick back a little and enjoy another year of the Almighty God’s grace. Today, Michael ‘Jamelody’ Williams celebrates his birthday. The artiste who is preparing for what is likely to be an exciting and fast paced 2013, returned from Jamaica recently where he wrapped production of a single with prominent reggae and dancehall artiste, Capleton. Amid that, he is currently promoting the release of a track entitled, ‘I Love You’, which is currently available on iTunes for worldwide purchase.

Jamelody’s God given gift of vocal distinction is especially appreciated as he celebrates his birthday today. He is reminded of his accomplishments and is thankful for the support received by his fans, friends and fellow entertains across the world. His recent visit to Jamaica afforded the opportunity to work with a number of producers, among them Ace out of Bobby Digital’s Digital B studio who produced ‘I Love You’ and producer extraordinaire, Calibud also of Digital B studio, who recorded the single done with Capleton. That track is set for release in mid-January. Calibud described the T&T reggae singer as extraordinary- explaining that he feels Jamelody is in a class of his own. “He blends in so well in Jamaica but he is really in a class of his own and he has his own space in the industry. With more time spent in Jamaica, he will secure his space in the market,” said a confident Calibud. The Jamaican producer has produced the remake of the War riddim, which featured Bob Marley’s single, War. On it are artistes such as Taurus Riley, Shabba Ranks, Bushman and Cutty Ranks who collaboratively do the remake of Marley’s ‘War’. On the riddim, Jamelody sings with Capleton for what is expected to be a one of a kind contribution.

Ambitious as he is, the T&T artiste who hails from Carenage in West Trinidad, was able to work on approximately five singles while in Jamaica and having returned to Trinidad, he now has a short window of opportunity to relax on his birthday with friends and family. The recent release of VP records’ Strictly The Best 46 album in the United States has seen Jamelody’s single ‘Can’t Take My Eyes Off of You’, accompany the music of hit-makers like Jah Cure and other top billing acts, automatically signaling the high caliber of artistes alongside whom he is ranked.

Pleased with his ongoing journey in the world of music, the young entertainer who proudly represents Trinidad and Tobago, continues to work hard in a bid to become a household name in the worldwide reggae market. Still, even amid the hard work he’s been putting in, he takes this time to give thanks for his blessings and certainly wish everyone a safe and enjoyable holiday season, in the same breath calling on fans to anticipate a tremendous catalogue of new music in the New Year.