By Sandhya aka Vamp Juice
Published on 29-Dec-12
Are you ready to SOCAAAAAAAAAAAAAAAAA or DIE?!!!! The Power of Soca is eminent within EACH and EVERY KOS event held in Toronto - the Mecca of ...
>> View Soca Or Die December 2012 Gallery 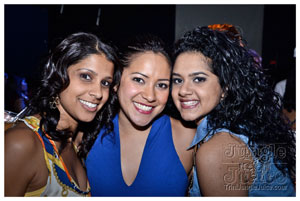 The Power of Soca is eminent within EACH and EVERY KOS event held in Toronto - the Mecca of Soca!

The vibes at Soca or Die were brewing long before the night itself. With the majority of tickets SOLD OUT in advance and limited tickets available at the door, Tweets flooded expressing excitement for this long-awaited event featuring one of Trinidad’s most popular artistes, Kes the Band (cue women preparing their sexy outfits a whole month in advance and men plotting exactly how they are going to “thief a wine”).

Once inside the spacious Kool Haus, drinks were well flowing and the crowd was well warmed up with the soundtrack provided by The New KOS. The best thing about an event with this level of popularity: it is a REAL LIME! No need to find out who and who going or not. Just buy your ticket and head to the fete one time. You are GUARANTEED to see good, familiar faces and waists. Another assurance is the performers. Unless for reasons outside of his immediate control, Dr. Jay ALWAYS delivers! Right at 1 a.m., Kes the Band took over the stage performing for a solid 90 minutes with a full band, back-up dancers and a guest appearance by the legendary David Rudder as they performed their 2013 Soca song, ‘Live Yuh Life Like Yuh Playing Mas’. Telling a small story to say Toronto was the first City he has ever seen, Kees expressed his respect and love for the City and fete-goers. The wining and wukking session came to an inevitable end when Kes the Band performed their newest 2013 Carnival hit, ‘Disgusting’, leaving the energy at Kool Haus at its peak, bodies sweating from the heat, and a roar for more.

Thank you to Dr. Jay and The New KOS for yet another vibe-filled, positive fete: setting the bar high and continuously raising it on their own through years of service and professionalism.