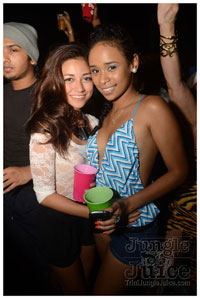 As I entered the venue of Jean Pierre Complex, the great memories of last year's TRIBE ICE (see coverage) ran through my mind. The thoughts of lovely women, great music, mesmerizing performances and uncontrollable vibes flooded my brain like Central Trinidad during the rainy season. And I was surely not disappointed. From the gates I was greeted by the warm smiles of companies' and brands' promotional girls; who wasted no time in gracing us with their beautiful faces imprinted on our cameras.

Talk about people! Now there were a couple of other events happening that same night which could have caused the numbers to decrease, but all in all, the crowd was more sticky than fly paper in a candy factory. I'm pretty sure if TRICE ICE was the only event that night, promoters would have had to house patrons in two venues. Beautiful ladies dancing to the music of the 2013 soca lineup, the men enjoying the company of friends and associates, oh and did I mention it was a cooler party? An insane one if I might add. So let the drinks flow. 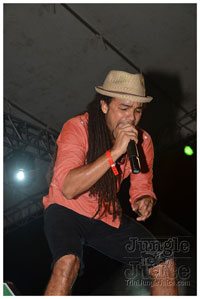 In traditional TRIBE fashion, they never seize to impress and amaze their partygoers; time for live performances. Gracing the stage first was Mr. Wotless and most women's heart throb; Kes. He even gave some lucky females the opportunity to join him on stage and enjoy the music alongside him. I'm sure this brought delight to the crowd, but at the same time some brought envy and jealousy to those die hard fans who just were not able to join their favorite artiste on stage. His performance was energetic and groovy, speaking of which, it seems like he is determined to take back his crown as Groovy Monarch. Afterwards, another competitor for the Groovy Monarch title came on stage and brought more chills to the TRIBE ICE patrons. She said that to be the monarch you have to be a specialist. Yes, you heard me correctly... she. And no doubt about it, she is really the 'wining' specialist. Denise 'Saucy Wow' Belfon entertained the crowd with her flexibility and dancing skills. Truly something for us men to appreciate and ladies to take note of. This may be a saucy carnival for Miss Belfon. New York's own Lyrikal and Yankee Boy then brought forward their 2013 contributions, with Lyrikal even squeezing in some of his old school songs. 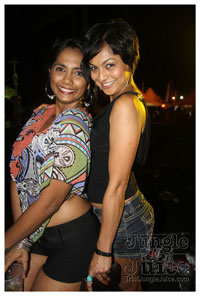 Ravi B from the band Karma then came on stage with his song "Prescription." Dressed in a doctor's coat and stethoscope around his neck. Now he's going up for the Chutney Soca Monarch, and after his performance, I believe his chances are very great for taking back the crown as well.

We ready, yeah we ready, we ready, yeah we ready .... No doubt theme for masqueraders of Carnival 2013. The Soca Viking Bunji Garlin was the one to close off the event with a great performance which included his past contributions and present. It was received by the crowd with wide open arms. He also told his fans that there maybe a possibility of him entering the Monarch run.... maybe.