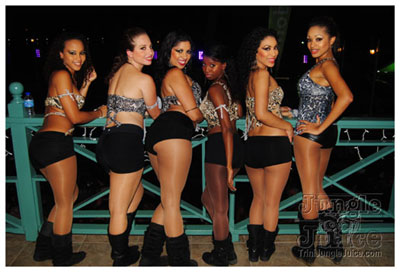 Pier 1 was ram out with sexy sexy feters ready to kick off the 2k13 carnival season. And these women were ready to show off their carnival bodies they've been working on all year!

With a bring your own booze system, a well stocked bar, and a variety of food stuff for sale, everyone was well prepared for a great night. DJ DeGannes and Spartan kicked things off with all the best Soca of 2013, after which came performances by Michelle Xavier, K. Rich and Double M himself along with the HD family ... Farmer Nappy and Patrice Roberts. Making a special guest appearance was Drupatee, Miss Indian Gyal, who gave a great lesson on how to wuk up all the larkis (girls) in the crowd. ;-) Montano also announced that for 2013 carnival, he will be exclusive to Fantasy mas band and their events as he quoted rapper Trinidad James line, "Don't believe me just watch.... don't believe me just watch."

Fantasy's supporters all came out and the HD band didn't disappoint with their 1st performance for season. All in all, a great night to remember.

ps. If you see blurry photos in the gallery, it's not poor photography, it was jus Machel FOGgin' up the place!