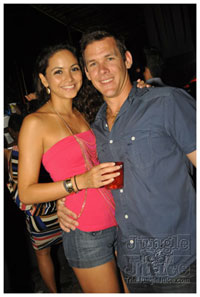 We entered ONE Fete ready to 'fog up' the place! That is to say ready to take advantage of the elaborate all-inclusive extravaganza that ONE Fete has become synonymous with over the years.

Hyped up, we headed to the bars first and to scope out the scene a little before we filled our bellies. We were a little thrown off by the venue but alas the cricket match at the Queen's Park Oval displaced the promoters from their usual home. This did not seem to lessen the vibes however as when we entered patrons were thoroughly enjoying a performance by Kes the Band. The bar staff was efficient as usual so getting drinks was never a process and with a couple in we headed to the food area. Unfortunately for us it seemed the masses had already ravaged some of the booths as they had already run out. Thankfully there was still suckling pig in abundance for the pork lovers among us.

Bubbly in hand, we made our way to enjoy what was left of the Kes performance. While the front of the crowd was well into it we could tell that those at the back were just warming up or perhaps letting their food digest. The DJ took over after Kes exited the stage and kept us wining to the latest 2013 Soca. This provided the perfect opportunity to check out the various promotional stalls and of course get some more suckling pig. 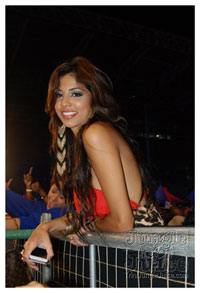 We were a bit disappointed that some of the food and drink ran out before we had had our fill, but before we could get too upset, Machel Montano and the HD family took the stage and we found ourselves fogging up the place front and centre. With a performance that never disappoints Machel, Patrice Roberts, Farmer Nappy and the HD dancers delivered hit after hit and Mr. HD even teased the crowd with a sample of his Road March offering for 2013 - "Float".

While we did notice the event was less grand than years gone by, we did not let that dampen our carnival spirits, all in all it was a good warm up for the short but intense C2k13 season.

On to the next!

Teekay for the TJJ fam