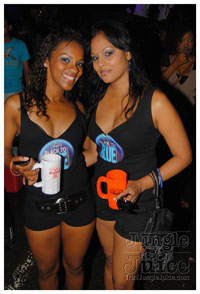 IS a Cooler Breakfast party! Bring your own rum and come enjoy yourself.

A showcase of masqueraders and the awesome styles of Private Ryan, Hypa Hoppa and Assassin Singh, Spartan and Tech, Mazel, Phats and DJ Simmo to start the night and take the vibes till sunrise. Then came Mr. Kes to "Thief A Wine" on the South girls! After getting the crowd all hyped up, T-Rock delivered his first performance for the season with "Hit & Run" before making way for the legend Superblue who made this Friday night as Fantastic as ever, performing "Fantastic Friday".

Following him was Yankey Boy to teach the crowd a lesson about speading too much "Rumors". Then .... "the sun was now raising up, but the crowd was already up" as Bunji Garlin came to destroy what was left of the stage with 2013 run away hit "Differentology" and plenty of free-styling in true Bunji fashion.

Vincy bad boy Problem Child made a guest appearance with Bunji before Ravi B. gave the Black to Blue crowd his carnival "Prescription". Afterwards, it was just to grab your breakfast, maybe take a pass through the wet zone, and head home.