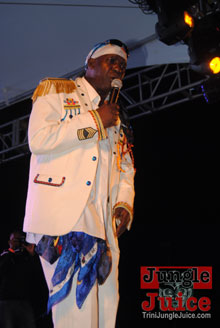 Port-of-Spain, Trinidad. January 16, 2013 -- Prison’s fete is Soca For Life in 2013 and the anticipation is high among both members of the Prison’s fraternity and the general public at large. The event is being billed as the biggest carnival fete to hit East Trinidad in a very long time. Among the big hit makers prepared to release the energy on January 26th is Austin Lyons- Super Blue – a man whose re-emergence has signaled the awakening of what one artiste coined “the ‘jumpable’, ‘wavable’ energy we missed.”

Soca artiste Blaxx is slated to perform at the fete and recently he noted that the iconic veteran has in fact brought back a heightened level of energy to the season. Many on the street have echoed his sentiments, so organisers of the Soca For Life event are confident that Superblue’s appearance at the Prison’s Sports and Cultural Club in Arouca on January 26th, will be one to remember.

Prison’s Sports and Cultural Club Public Relations manager, Michelle Weekes explained that shuttle services will be provided to patrons from areas such as Curepe Junction, the Arima Velodrome and from Arouca Junction. Things are still being put in place to accommodate patrons coming from other parts of the country. It’s a measure specifically aimed at ensuring patrons arrive at the event safely and thereafter, return to a point closest to their homes, just as they arrived.

Already, ticket sales have reportedly skyrocketed- this as persons who are familiar with the annual Prison’s Sports and Cultural Day, hosted at the same venue, have rushed to secure their space at the event. Organisers have added free finger food zones to the experience, allowing for patrons’ all round satisfaction.

With tickets currently being sold at a price of $150, organisers say there is no guarantee that this cost will be maintained for very long. “This fete is already being talked about by most if not every person living on the East-West corridor. We know there will be a rush for tickets on the night of the fete and because of that we’re encouraging patrons to go out and get their tickets at the advertised retailers now,” said one organiser. It’s a small request to ensure the overall enjoyment of everyone, as the purchase of tickets beforehand will lend to a smooth entry on the night. Regardless, tickets will be sold at the venue on show night- this as artistes inclusive of Bunji, Fay-Ann and Asylum, KI and 3Veni, Destra Garcia and her band, Ravi B and Karma, Iwer George, Nadia Batson, Denise Belfon and so many others are preparing to deliver nothing short of their best.

Persons wishing to secure special reserved tickets at $300, can access this special accommodation by calling 768-1026.

On another note, organisers have noted that by January 26th, many visitors would have landed in Trinidad for the Carnival 2013 experience. Strategically they have been reaching out to the foreign fete lovers on various levels to ensure their patronage at Soca For Life. Excitedly, many have answered the call- assuring of their attendance at the Eastern fete.

Tight security- a major defense against any eventuality, Weekes has indicated on a number of occasions that special security arrangements have been created to cater to this particular fete. “We have all hands on board with Soca For Life. We know the capacity crowd expected and we are prepared to prevent any unwanted eventuality. That’s an assurance,” she said.

For more information on Soca For Life, patrons can long on to www.etceterabuzz.com.