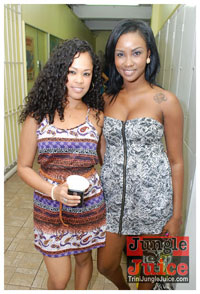 The College's compound was transformed into a vibes mecca. Fully lit stage, well stocked bars and eating spots, and just a warm and friendly atmosphere. What more can you ask for?

Patrons being entertained by soca artists such as Iwer George, Farmer Nappy, Destra, and Blaxx with Roy Cape band just to name a few had them all singing along, chipping and moving the night away. Also Bunji Garlin alongside his wife Fay-ann and The Asylum Band had the crowd wanting more... especially an appearance by the high priest of soca Superblue; who unfortunately was not present at the event.

There were some guest appearances though. 5Star Akil showed the crowd that he parties hard ("Partier"). JW & Blaze gave us their last entry to the Monarch race "In A Timing", but still had the crowd at their fingertips with the memorable "Palance". Chucky and Problem Child also had the crowd grooving.

This was one of the events that will be remembered in time to come. Yet there are still more to come so hopefully this event will continue being the success that it is.

Many thanks to the Old Hilarians committee for having us at their event and to all staff and vendors present for making our experience worth it. We'll see you again in 2014 ladies.