By Kris-Michael aka Jokey Juice
Published on 20-Jan-13
As I mentioned earlier, masses of people filled the streets, making the single file to enter and having their coolers checked by security. You all know a particular event is rammed pack and exclusive when down to our friendly scalpers are ...
>> Stumped 3.0 Cooler Fete Gallery
>> View Trinidad & Tobago Carnival 2013 Coverage 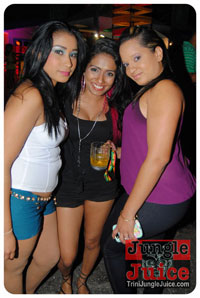 As I mentioned earlier, masses of people filled the streets, making the single file to enter and having their coolers checked by security. You all know a particular event is rammed pack and exclusive when down to our friendly scalpers are begging patrons for their tickets and finding it rather difficult to make their annual hustle and even entry.

Now to be honest, with the number of people that were present I thought there would've been a more evident atmosphere of vibe. That element felt somewhat absent. Don't get me wrong, the vibes rose when the DJs present played some of the 2013 contributions but when the music strayed away from the recent.... so did the vibe. I think that was the time they picked to dip their hands in their respective coolers or go to the bars for another drink.

Live performances always change the game as far as getting the crowd hyped; and this line up was no exception. First up to entertain the crowd was the first lady of the HD family Patrice Roberts who once again proved that a little wine never hurt nobody. Following Miss Roberts came the "Viking of Soca" Bunji Garlin; who has been having a great season thus far. Even though him as well as his wife Fay-Ann would not be competing in the coveted Power Soca Monarch Competition, their fans (whether they agree or disagree with their decision) showed showers of support still. Come to show that once the music quality and artiste's persona is righteous, the fans will support all the way. 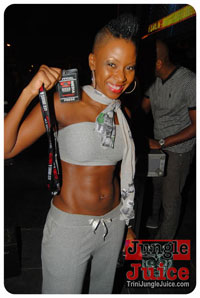 Last to hit the stage was the reigning groovy and power soca champion, double 'M' himself; Machel Montano. His performance was really the highlight of the night, but because of some technical problems, I guess it was cut shorter than scheduled. Either way, he hyped the crowd with his past tunes and elevated them even more with his newest song "Float" which seems to be his choice to defend his Power Monarch title with.

Stumped once again was a success, getting more and more anxious for that notorious Monday and Tuesday where everyone can just have the best time of their life.

Must give our thanks to all QPCC and Red Ants committee members and staff for having the juice present and putting on another grand slam of a show. We know you have a couple more coming up before Carnival so we will be there to bring fun, vibes, and most important..... the juice. Jokey Juice signing out.