Fete With The Saints 2013 Review 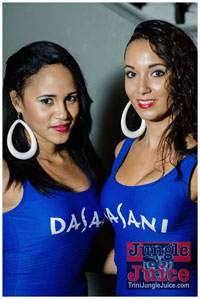 Time for this old saint to come home and represent for sons of the old white and blue. St. Mary's College, oh how I missed you. Saturday 19th January 2013 would mark the date of the Jokey Juice's return to his old college grounds as well as the day they celebrate their 150th year of saints. Now that's an accomplishment. So let's dance and Fete With The Saints.

From entry I was greeted by smiling faces and my nostrils filled with the array of food that was on display. But hold on, before I get to that, there's a live band getting ready to perform so I'll come back and explain what delicacies were on display.

The first band to grace the school's compound was Dil-E-Nadan. They soothed the crowd with their renditions of old tunes and even some new. Lead vocalist Raymond Ramnarine spared no opportunity in thanking his fans for helping securing a spot in the Chutney Soca Monarch which he performed at the Friday night before. Joining them on stage was "D Boss" Iwer George who had the patrons bubblin' all over the courtyard. 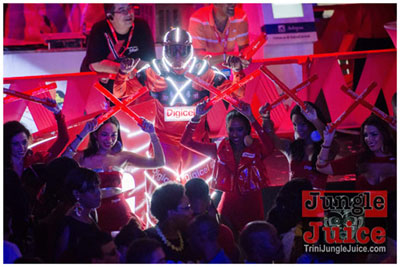 Okay, now back to the food. And when I say food... I mean FOOD! From chocolate fountains and different flavored ice-creams for those who had more of a sweet tooth, to Wild Meats, to Chinese, Bake & Shark, Roti.... my mouth is watering just reminiscing about it. Everything was in availability for everyone's appetite. 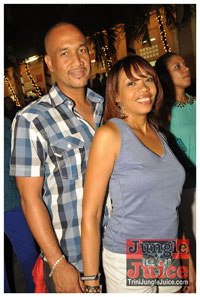 Next to grace the stage was a past saint himself. Kes and his band took us to IOK (Island of Kes) and filled the air with all his hits with his band members and choreographed dancers keeping the crowd hyped. But that's not all. Mobile company Digicel; who is Kes' proud endorser had their sexy promotion girls make their way through the crowd with glow stick, followed by a fully lit human robot, equipped with a portable fog machine. This had everyone in amazement and awe.

To end the night of performances, the legendary Roy Cape All Stars came on with their front man Blaxx. He seems to be overflowing with confidence by his performance and chance of snatching the title from the reigning monarch. Only on Fantastic Friday will we see if he can keep this momentum going.

Saints... it's always a pleasure to revisit your school yard and get nostalgic from all the memories created. Many thanks to all teachers, staff and committee members who helped make this event possible. Hate that I had to leave, but you know.... so many events, so little time. Jokey Juice was there, where were y'all??!!