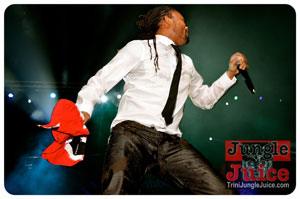 Machel Montano and friends were the headlined a deep cast that was scheduled to perform at the first ever Caribbean concert to be held at Brooklyn, New York's new Barclays Center on November 2nd 2012. As a result of hurricane Sandy however, the show, hosted by Caribbean Fever, was pushed to Monday December 17th 2012.....and oh..what a night!!! Dahved Levey, one of the top Caribbean DJ's of his time, along with Promoter Mike Samuel, spearheaded this bringing together of Caribbean entertainers  on one night. Worthy of being mentioned, a pre-concert reception was held in honor of some of the groud-breakers that placed Caribbean music and people on the US map. The West Indian influence and culture in Brooklyn and its surrounding boroughs are extremely evident in the forms of food and arts and craft but none more influential that its music.

Despite the unfortunate delay, the show made its mark. Considering the forthcoming line up, the 14,000 + audience inside the Barclays Center, were in for a treat on this evening!  The first of it's kind to hit Brooklyn NY, this event was geared to rival that of the events at MSG in neighboring Manhattan, NY. This was the first ever Caribbean based event that had featured artists either directly from the Caribbean or those of Caribbean parentage!  Opening the show, and fittingly so, Trinidad's very own MC Wassy, now a Brooklyn native, literally got the crowd on their feet. The singing MC Wassy and his nephew DJ Spice took the crowd back....way back at times...and brought them forward, while keeping everyone upbeat. 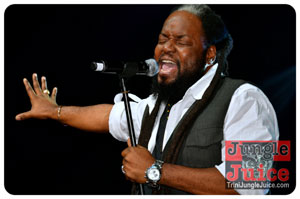 Showtime seemed to start on time with the T-Mickey Band from Jamaica and past Miss Universe - Wendy Fitz Williams.  Famed Bajan singer and ex-lead singer for Square One - Allison Hinds, was next in line. And in true Alison Fashion gave an exhilarating performance to the delight of the Caribbean Flag waving audience.  We were off to a great start.  1980/90's hip hop greats Slick Rick and Doug E Fresh followed Chub Rock on stage. One thing for the sure, they had the crowd on their feet with their old school classics. Lil Vicious (all grown up now) who at times performed with Doug E Fresh, performed well. He and Doug E delighted the Barclays with their beatbox and mini reggae segment making the revelers feel nostalgic.

Just before midnight, the already steady event, changed gear with a beautiful performance by Morgan Heritage. The famed family group, brought pleasure to the audience as it was the first time in five years that they performed together, after deciding to pursue their individualistic journeys. Morgan Heritage were fantastic, as usual. At one point they were graced on stage of their musically talented father Roy Morgan. Following them were DJ's Mighty Crown, singers Vegas and Baby Cham (who brought out Foxy Brown and "O") had the dancehall lovers singing every one of their popular songs.  The vibration and excitement of the event continued to rise on this Monday evening. 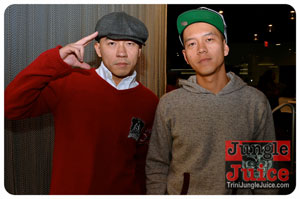 Certainly the evening would not be complete without the headline act's presence and performance. Trinidad and Tobago's son of the soil Machel Montano, arguably the most popular Caribbean artist and without a doubt, the most entertaining, pleasured the audience as usual with his outstanding performance. Whether you call him Mr. Fete or Mr HD, Machel made his way to the stage with his full entourage of  HD band and dancers. Pumped with energy and ready to entertain, completely erupted the Barclays Center as he started off his session with his 2013 carnival hit 'She Ready'!  Other top Trinbagonian artists, Farmer Nappy (Mingle), Patrice Roberts (A Little Wine), Benji (Trini, Iza Feter) and Kerwin DuBois (Fete Ah De Year) all sang alongside Machel and his HD dancers all contributing to this historical evening in Brooklyn, NY @ the Barclays Center.

For another ground breaking event, it was very evident that the West Indian public showed their full support in fine style. A well dressed and excitable audience were treated to a wonderful show, and Trinijunglejuice.com was there to bring it to you, as another first for the Caribbean was a success!