Port-of-Spain, Trinidad. January2 28, 2013 -- Trinidad and Tobago will erupt with an unforgettable and possibly uncontrollable level of euphoric energy by week’s end. This according to oganisers of the annual Army Fete, which takes place this Friday, February 1st at the Queen’s Park Savannah in Port-of-Spain. Already, tickets for the fete, which is considered by most, if not all fete lovers as that ‘must-attend’ carnival fete, are going fast. Those behind the scenes say this year will likely be one of the best years for Army fete, ever.

Touted as a grand regional assembly of the greatest Soca artistes of the Caribbean, many are anxious to experience the ultimate carnival showdown. Fashion is always a major statement at Army fete- this as not only the artistes, but patrons too- dress in their army colours to represent well at this major carnival show. Foreigners coming in for the first time are being encouraged to get tickets for this event as it is a fact that after many years, Army Fete remains an event that enjoys the attendance and support of every person, from every socio economic strata, in T&T and from overseas. It is also that single fete in Carnival that assures an unparalleled level of safety and security to all patrons. 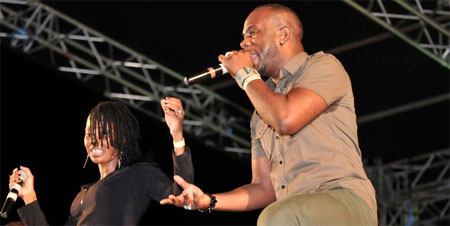 2013 will see all artistes perform to live music. Four bands have been booked for the event- Bunji Garlin, Fay-Ann Lyons and Asylum, Destra and her band, Roy Cape with Blaxx and Kes the Band. Solo artistes who will not be performing with the headline artistes of one of the aforementioned bands, will be backed by Vincent and the Soca Unit. Organisers say this is to ensure that patrons get value for their money. “We have heard the comments of dissatisfaction by patrons who say they become disappointed when they attend a show only to realize that the artistes are performing to tracks. We have upped the anti when it comes to that. We’re giving everyone the big band vibe- the big band energy.”

Tickets are being sold in two categories in 2013- General and VIP. VIP Patrons will be treated to a closer view of the stage certainly other perks. Tickets for both the VIP and General admission areas are being sold online, via www.islandeticket.com in addition to regular ticket outlets. A couple’s VIP special is also available, however due to the rush for tickets, in recent days, there are no guarantees that this package will be available by midweek. As such, patrons are encouraged to get their tickets as soon as possible

Fun, Soca energy, security and safety- all at one massive venue in Trinidad and Tobago- these, according to organisers, are the elements of what will be the biggest and best carnival fete in 2013.

For more information on Army Fete, patrons can log on to www.etceterabuzz.com.