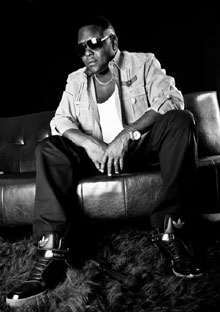 Port-of-Spain, Trinidad. January 31, 2013 -- Trinidad and Tobago Soca artiste, Dexter ‘Blaxx’ Stewart says he sees the situation with his musical colleague, Machel Montano, as a lesson to be learnt by everyone in public life. Following Wednesday’s public announcement by state owned, Telecommunications Services of Trinidad and Tobago that Montano’s endorsee contract would be suspended, Stewart said he was left with thoughts, not only of Montano, but of all artistes, and the realities of being in the public eye. He noted that it was a rude awakening for him and said it certainly should be the same for all entertainers and members of the entertainment industry.

Stewart grew up in Morvant, Laventille- an area dubbed a crime hot spot in Trinidad. He understands the rigors of life and pats himself on the back each day for having done well for himself and his family. Anger and rage, he says, are two reactions that must be controlled as a person in the public eye. “As a regular man on the street, you can get away with many things. People like Machel Montano, Destra, Blaxx, Fay-Ann Lyons- there’s no room for slip ups. That’s the reality of the business. I’m sorry that it has taken one man’s dilemma, to draw focus to this- at least for me,” he lamented.

Uncertain as to whether other artistes have examined the situation from this perspective, Blaxx said he hopes everyone in the business takes a step back to look at their personal reactions to situations. “Regardless of what we want to tell ourselves, we are role models when we step into the entertainment domain. Some of us choose to believe that we are not, but we are, and when you become a role model- your life has to be lived as such,” he said.

Refusing to comment on the case itself and Montano’s imminent sentencing, Blaxx said while he was saddened by the state of affairs, considering Montano’s role in the industry, he would be making this situation a lesson for his career. “We all work hard- so hard man. We just have to understand that the cameras are always rolling- even when we think they’re not. It is tough. Nobody is nice all the time but when you’re in a business like this, you have to project ‘nice’ all the time otherwise you’ll be at the receiving end of severe backlash,” he said.

Amid his preparations for the groovy leg of the Soca Monarch competition, in which he will come up against Montano, Blaxx took the time out to reflect on Machel’s journey in the business. He commended his efforts and said that he appreciates all that Montano has done, and continues to do for Soca music and Trinidad and Tobago. He hopes for the best outcome for all affected by this situation and says he understands that no man is above the law. “In an ideal world, this would never have happened but it has, and now, we must all learn from it. Out of everything comes a lesson. Let’s just hope every artiste, everywhere, learns from this one.”